update on PARCC at Board of Ed

McKenna: "This is yours, Commissioner"
Chester: "This is ours, this is OURS"
PowerPoint here

Halfway through our two year process: last year "testing the test" looking at items being tested
this spring "using PARCC in a fully operational mode"
districts giving either PARCC or MCAS
a year from now, Board will need to choose
13 PARCC states: governing board has representation from each state
members of board serve without pay; serve as oversight of project
"other states very much look to us for guidance"
being done with two outside contractors:


each state contracts separately with those two entitities, though each has a lead state to arrange procurement; each state then joins, following their own procurement
as of 2010, 26 states signed on...now has dropped to 13 states, though two, Louisiana and New York, not expected to test this spring
Chester refers to himself as the color commentatory: New York Governor Cuomo said that it'll be four years before anyone in the state has to deal with the Common Core, and no one knows what he knows by that.
Louisiana having a face-off
"these issue have nothing to do with anyone's assessment of what is being done...they have to do with political calculus"
I believe many of us would disputed that.
McKenna: are we the only one doing both?
Chester: we are the only state that is not all in this spring
McKenna: asking about SMARTER: do they have a test? (yes) how many states? (they don't know, but it's more)
it's going to cost more if there are fewer states
McKenna comments that the results of the November 4 election will have a lot to do with which states are doing what
Chester wants to be sure that Board has sufficient grounding in the information that you're ready to make that decision
Every month the state will give the board a slice of the information: 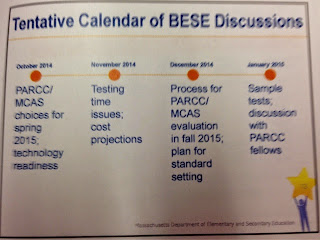 McKenna: our priorities should be reflected in the time we spend on things, you're spending an AWFUL lot of time on testing 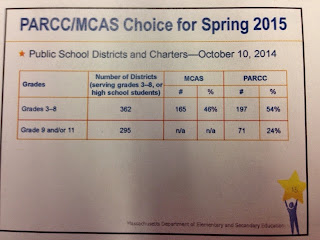 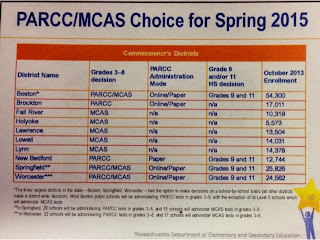 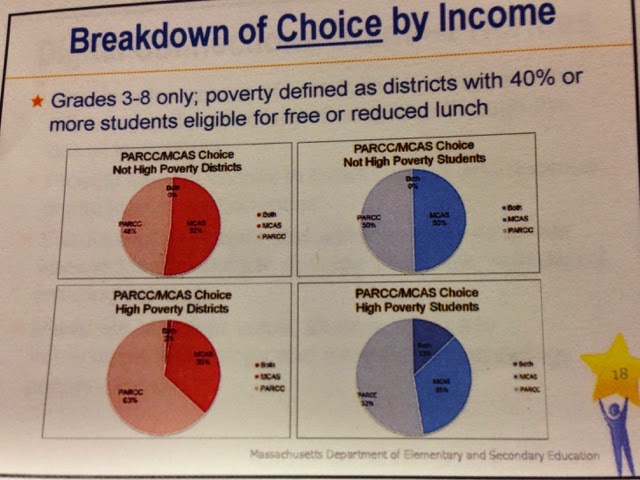 Note that the majority of high poverty districts are choosing PARCC; it's about equal for not high poverty districts
Query that schools cannot lose status in accountability if they're using PARCC, only gain
also hearing that districts recognize that the test will change one way or the other, so they're switching
digital connection grants IT pilot project: $5M pilot phase of $38M bond

districts will need to put up between 30% and 70% depending on their chapter 70 aid
Stewart: a lot of schools don't do keyboarding
Agreement, kids not used to using tools provided for the test online
devices "are getting cheaper and cheaper...districts will be able to replace them as they do textbooks now"
that's assuming we replace textbooks now
comment that many districts don't have enough bandwidth, though all have internet access

Tullio (Deputy Sec'ty): may have been about assessment, but not just about testing
convened a stakeholder group on technology: "right now the trend could not be clearer...all major assessments will be online"
districts get that
"the sooner we can get this money out, the better"
McKenna: plan to train test administrators?
"Hitting that hard"
train the trainer model. Develop regional sites
Revere deputy super: "look at our instruction...pilot PARCC in three of eleven schools"
continuation of technology based instruction
"we didn't do this alone worked with DESE, Mass Superintendents, MTA
elements that worked well, what we were challenged by, suggestions
Students were positive to test
average classroom teacher in charge of a room of students taking at test for the first time
teachers have varying degrees of comfort
reverse of roles, in many cases
(In Burlington, much of that done by technology department)
teachers became far more comfortable, better at troubleshooting technology glitches
time and energy taken to upload the student data; worked with Pearson to engineer future workarounds
"there were some growing pains...I'm sure that Pearson was ready to take us on...calling a call center and getting put on a priority line...we were on the phone on a wait line sometimes for a half an hour while testing was going on"
specific elements of PARCC test, our students didn't have experience with
"don't think those are overwhelming elements..." advocating that schools add to their day to day instructional knowledge (like expanding data entry cells, for example)
iPads didn't have screen width to display entire question; needed external keyboards
realized during the testing, the students unplugged the keyboard and used the onscreen computer
no longer allowed: graphic organizers, math (?) sheets
help Pearson improve their customer service
"look at urban technology divide...students walking into us who don't have access at home"
High praise from David Willyard, student member on Revere Public Schools
Noyce: how much time needs to spent to get students used to elements of test they're not used to?
"I would anticipate either in the realm of instruction or in technology classes, I don't think it takes much time at all"
Stewart (to Chester): loss of half of states. Have you discussed what happens if we get into single numbers? Wondering what our obligations are and what we're committed to
Chester: 12 states, 11 giving PARCC. We can walk away from it, depending on how we walk away from a contract, there may be some penalties. Assuming that if this proves its medal this coming spring, we'll be bringing this recommendation to you.
"we're not in it to see if it's a good test or not. We're in it to build a good test."
McKenna: have a survey out, results are back, have an RFP out for deeper results
Will we have information back?
Wulfson: hoping to come back in November with more information

Email ThisBlogThis!Share to TwitterShare to FacebookShare to Pinterest
Labels: Board of Ed, MCAS, PARCC, standardized tests