in other words, yes, yes, I do read other districts' budgets in my spare time...
The Springfield School Committee received their proposed FY15 budget last night, and it's an interesting comparison, if you're from Worcester, as, with about 26,000 students, Springfield is just a bit larger of a district than Worcester is.
Unfortunately, they haven't yet posted the proposed FY15 budget online, but, putting the news article together with the current year budget is enough to give us some insights.
For this (FY14) year, the Springfield Public Schools general fund budget is $357,868,724; compare that with our general fund budget of $297,360,533. (In both cases, that's not including grants and other revenue; the above news article is including grants in the number used.) The difference in that bottom line is not due to Springfield funding their schools at an above minimum this year--they hit zero on Net School Spending--but due to the difference in the population they serve. Springfield has a poverty rate of 87.2% of their students; Worcester's student poverty rate is 73%. As the foundation budget calculation increases funds for low income students, Springfield's higher number of that population yields a significantly higher budget.
I found their solving their budget gap by cutting central administration positions interesting, so I took a look at their administrative table of organization, which is...large.
That is in keeping with the chart you may remember from last year on administration: 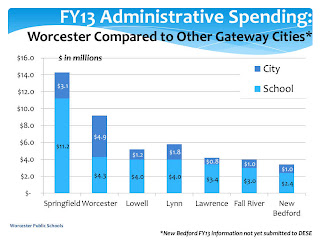 Note that the above uses the state's division for administration, so it compares like to like.
With a student population of 1000 more students, Springfield is spending close to three times what Worcester is. Even with a 20% cut in that line item, Springfield is going to be spending more than double what Worcester does on internal school administration. So Springfield may well be able to manage a cut here; Worcester cannot do likewise.
What's also interesting about that comparison is Springfield and the schools renegotiated their administrative rate in 2012-13, going from the percentage of the city budget charge (the system Worcester operates under) to a per-pupil charge (generally seen as making more sense for large urban districts). Worcester spent $4.9 million in FY13 on city administrative charges; Springfield spent $3.1 million, and, if you look at their Schedule 19 (the list of what the city is handling) had substantially more services handled by the municipality.

I'll be taking a look at their FY15 budget once it's up, and post if I find more.