Signs of Worcester's industrial past

More unseen corners of the Worcester Public Schools...today: the Worcester East Middle School's boiler room.
When Worcester East Middle School was opened in 1923, Calvin Coolidge was in the White House, a first class postage stamp was two cents, and the newly opened Grafton Street Junior High School was heated with three massive boilers that burned coal.
Much of that has changed, but the boilers are still there, having been converted over their history first to oil, then to natural gas. 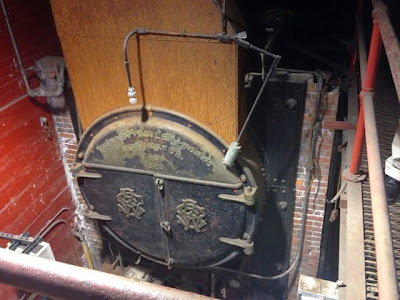 It is difficult to get the sheer size of these boilers. These photos were taken from a basement-level catwalk over them; the boilers themselves are a story and a half or so down further. Each is the size of a steam locomotive. They are massive. 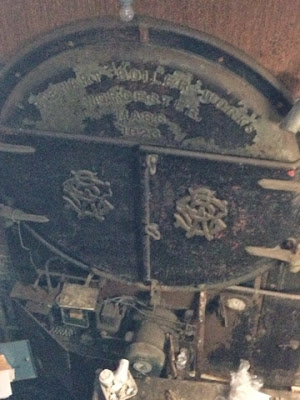 The boilers were manufactured here in Worcester at Stewart Works (as you might be able to read on the doors, which say STEWART BOILER WORKS  WORCESTER, MASS  1923). The Worcester Historical Museum has a photo posted of workers shoveling coal into just such boilers. 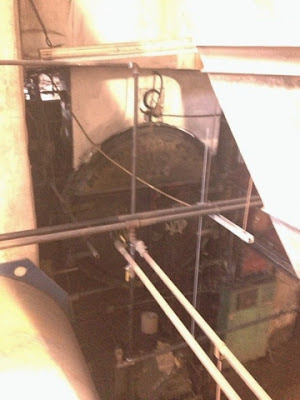 Of Stewart Works, Ellery Bicknell Crane in Historic Homes and Institutions and Genealogical and Personal Memoirs of Worcester County, published in 1907 has this to say:

THE STEWART BOILER WORKS of Worcester, well known throughout the New England states, and which stands high among the leading industries of the city of Worcester, sustaining a reputation for thorough workmanship and honorable dealing, has since September, 1888, been under the ownership of James C, John C. and Charles M. Stewart, sons of Charles Stewart, a native of Glasgow, Scotland, who learned his trade in England. Upon his arrival in Worcester, Massachusetts, Charles Stewart began manufacturing boilers for Bellows & Whitcomb, who were at that time engaged in building portable steam engines...In September, 1889, the works were moved to new shops at the present location, Albany street. The plant is extensive, covering a space of nearly two acres of land located a half mile east of the Union station, and on the line of the Boston & Albany Railroad, and easily accessible from all parts of the city of Worcester by means of the electric cars. The main building is sixty by three hundred and seventy feet, and there are a number of smaller buildings for various purposes, all admirably equipped with machinery, There is a spur track running alongside the works, and with a powerful electric hoisting crane gives excellent facilities for receiving and shipping goods. The firm manufactures locomotive, marine and tubular boilers, tanks for oil, water and general purposes, smoke stacks, penstocks, and heavy plate iron work of all kinds. They also attend to repairs of boilers in mills, etc. They employ on an average seventy-five men, many of whom have served at the works for a long period of time. 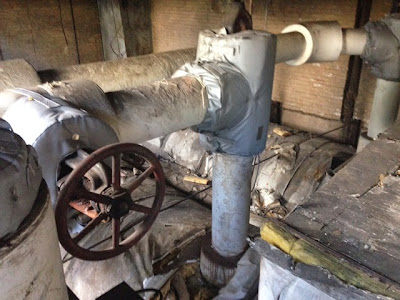 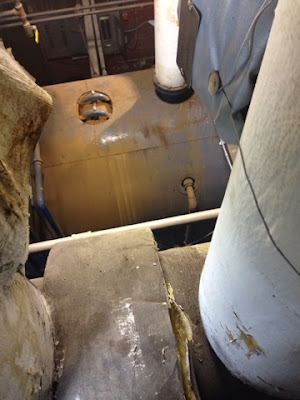 As the boilers burned coal (and large amounts of it), there were doors that have onto the street for coal delivery through a chute: 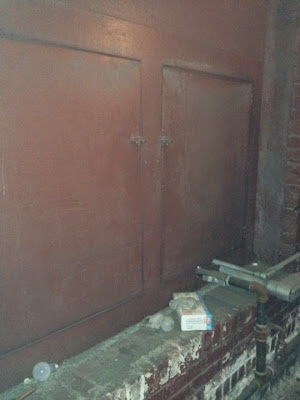 Up until recent years, there was still a "fireman" designation in the Worcester Public Schools custodians' contract, from the days when it was an additional custodial duty to keep these stoked with coal to heat the building. 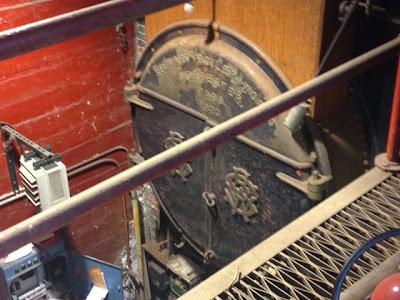 These are among the projects for this summer, as the Mass School Building Authority has committed to funding 80% reimbursement on replacement.

While the School Committee member part of me is relieved that we aren't trying to nurse these through another winter, with school plant welding things back together in a frigid building, and the utility costs these entail...the Worcester history buff is a little sad to see them go.
Posted by Tracy Novick at 9:23 PM