Part of my periodic series of inside looks at WPS. As always, if you click the photo, it'll make it bigger.

I was over at Vernon Hill Elementary today, ahead of the impending blizzard. If you're a Worcester resident of any duration, you probably know this building, built in 1931, as Providence Street Junior High: 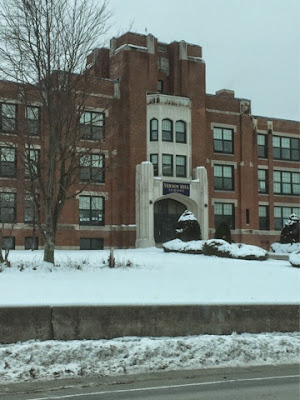 The front entrance brings you straight through the lobby and hallway into the auditorium, where the stage is backed with a mural of the school: 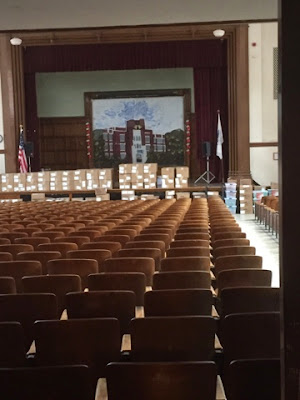 (That's the new math materials in all those boxes!)
Here's what the room looks like from the front: 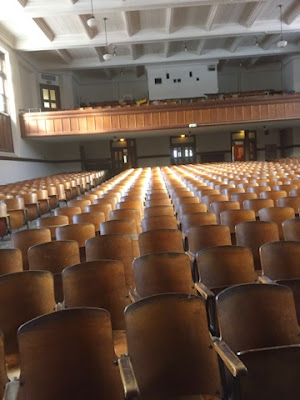 Back out in the entryway, there are two murals. 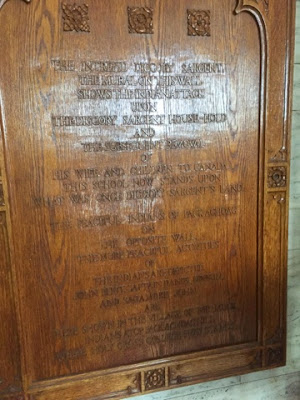 It says: "The intrepid Diggory Sargent.
The mural on this wall shows the Indian attack upon the Diggory Sargent House-hold and the subsequen removal of his wife and children to Canada. This school now stands up what was once Diggory Sargent's land. 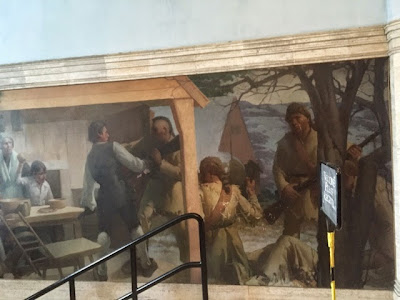 The attack on the Sargent family happened in the winter of 1703/04 during the second attempted English settlement of Worcester. Sargent had served as an English soldier durin King Philip's War and is said to have refused to leave Worcester even during the conflicts on the edge of English settlement. He was killed in the attack; his wife was killed shortly thereafter. The children were among those carried to Canada; some later returned in Massachusetts.

"The peaceful Indians of Packachoag on the opposite wall.
The more peaceful activities of the Indians are depicted.
John Eliot, Captain Daniel Gookin,  and Sagamore John are here shown in the of Nipmuck Indians atop Packachoag Hill where Holy Cross College now stands." 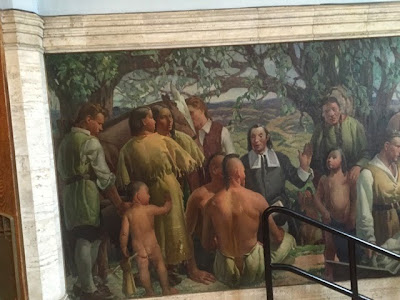 Eliot, known as "missionary to the Indians," who translated the Bible into Algonquian, shown with Daniel Gookin, Worcester County Sheriff, who was among those charged with founding Worcester, and Sagamore John (Horowaninit of Packachoag, who lead the Nipmucks in the area during early times of English settlement). 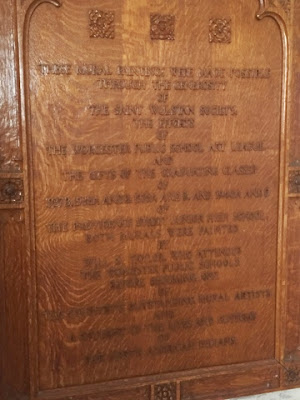 "These mural paintings were made possible through the generosity of the Saint Wulfstan Society, the efforts of the Worcester Public School Art League, and the gifts of the graduating classes 1937B, 1938A and B, 1939A and B, and 1940A and B of the Providence Street Junior High School. Both murals were painted by Will S. Taylor, who attended the Worcester Public Schools before becoming on of the country's outstanding mural artists and a student of the lives and customs of the North American Indians."