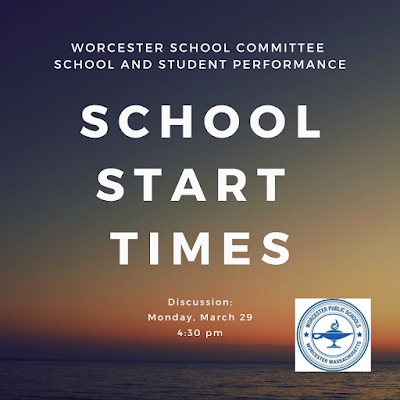 If you're looking to do some reading ahead of tomorrow's review of the research on school start times in our School and Student Performance subcommittee here in Worcester, you might take a look at today's Washington Post for this piece on how remote learning has opened the discussion with new insight of how well some students have done with that shift in schedule.

Here are the pieces we are reviewing tomorrow:

Posted by Tracy Novick at 2:08 PM No comments:

What do we know about the federal funding for schools?

There was this big national splash when the bill was signed, and a smaller one when it was announced the money was being released to states, but I am still seeing confusion over the latest round of federal funding for schools, signed by President Biden in March.
Let me see if I can clear a bit of that up.

You can get a general outline of how much is being spent at the national level here. There's a state by state tracker (which you may find paywalled) here. There is a district by district estimate here.

A few additional things to consider:

Posted by Tracy Novick at 9:51 PM No comments:

Testimony at these, incidentally, is by invitation only, but you can email: SenateCommittee.Ways&Means@masenate.gov

Read more »
Posted by Tracy Novick at 1:16 PM No comments:

Letter 2 to the Worcester delegation 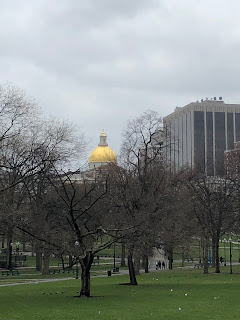 I write to you again from my seat on the Worcester School Committee, because I genuinely don't know what else to do.

We appear to have taken the entire Commonwealth of Massachusetts and made it a state receivership district over the course of a week, as the Commissioner has now claimed authority well in excess of that granted him by the laws you have passed.

The Commissioner does not have the authority to contravene collective bargaining agreements across the state. Yet this week, he has done so, declaring that districts must go back full time in building learning five days a week, regardless of what provisions are in their negotiated agreements with their local unions.

The Commissioner does not have the authority to make a  Schrödinger's cat of time of learning, where remote education does not count for student learning if the district has chosen it, but it does count if the family has chosen it, or if the school delivering it happens to be one of the two virtual schools the state has chartered. Yet this week, he has done so, making this contradiction the state policy of Massachusetts.

The Commissioner does not have the authority to reverse the state funding law based on his capricious definitions of time on learning, where days until the first week of April can be funded for elementary students, however delivered, but cannot be funded after the first week of April, if delivered other than he dictates. Yet, as you know, this is just what he has explicitly threatened.

It will not, I hope, escape your notice that the final consequence once again most hits the districts that have been hit hardest by the pandemic, that were hit hardest by underfunding of education, and historically have been underserved in every way. Those are the very districts most dependent on state funding, by design.

Those students more frequently attend school in older buildings, more often have bigger classes, and more frequently are hit by every manner of inequity our education and larger societal systems deliver.

I am sure that you have been assured that the Commissioner is considering waivers. I also know that such waivers will be few and will come only after the Department has checked, condescending tape measure in hand, that we meet his lesser standards of safety, rather than the higher ones of the federal government.

If it does not do so, it should have the authorities it has granted itself removed until such requirements for them are in place.

It is absolutely outrageous that, during this disrupted, tragic year, with vaccinations ever so slowly making their way into people, with the potential impacts of the new variants still largely unknown, and with this country in a race of one against the other, the state would put the health of our students, our staff, and our larger communities at massive risk in this way.

I would ask you to stop this. I would suggest you begin by suspending or amending for this year MGL Ch. 71, sec. 4a, which is what the Commissioner is citing as his authority to garnish state aid to districts. You might also consider his authorities under earlier sections of Ch. 71 in defining learning time, as well.

As you know, I take seriously our responsibilities to our students. I also believe the state has a role to play in ensuring that we meet those. That is not what is happening now.

As always, I am happy to discuss this further with any of you.

Thank you for your attention,

Posted by Tracy Novick at 8:24 PM No comments:

Letters sent to the Board of Ed ahead of yesterday's meeting

I tailored my letters to the recipients, so there are more than one; these were sent in my capacity as a Worcester School Committee member.

Email ThisBlogThis!Share to TwitterShare to FacebookShare to Pinterest
Labels: Board of Ed, letters, pandemic, regulation

March meeting of the Board of Ed

...which they moved to this week so that the Commissioner could ask that they pass authority for him to push districts back into buildings full time.

The agenda is here. The livestream is here.

Read more »
Posted by Tracy Novick at 1:47 PM No comments:

Commissioner is moving on regulation request: Board meets Friday

DESE has posted a Board of Ed meeting Friday afternoon. At it, the Commissioner is requesting the Board to add the following language to the time on learning regulations:

You can write to the Board of Ed here.  I'll post what I send them later today.

Posted by Tracy Novick at 1:19 PM No comments:

As President Biden said distribution would be via the federal pharmacy program, this makes sense.

Governor Baker has a 9 am COVID-19 announcement at a Gloucester elementary school.

Posted by Tracy Novick at 6:36 AM No comments: