Three to read on school reopening

I am finding this year that I rarely have time to sit down and write. Here are three to read on school reopening:

You can, of course, contrast the above with the remarks of the Commissioner, the Secretary, and Governor Baker yesterday, as covered here, here, here, and here.
Posted by Tracy Novick at 8:43 PM No comments:

You can find the livestream here; note that testimony today is by invitation, though anyone is welcome to send in written testimony to the co-chairs at Jason.Lewis@masenate.gov and Alice.Peisch@mahouse.gov.

updating as we go

Conditions of education in the Commonwealth

The Joint Committee on Education is holding a public hearing on conditions of education in Commonwealth this morning. They're accepting public testimony through Friday (email it to Jason.Lewis@masenate.gov and Alice.Peisch@mahouse.gov who are the co-chairs). I don't know yet if I will submit this as public testimony--it may be the weather or late October, but I'm feeling rather like I'm screaming into a void lately--but I did want to write a few things down from where I sit on the condition of public education in the Commonwealth. 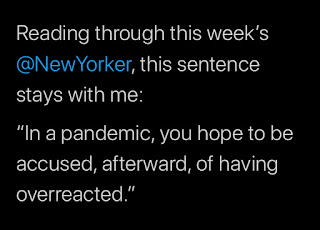 I think it's important to note, first, that kids are learning. They're learning in school buildings, they're learning at home, they're learning at alternative sites outside of either of those. The public education system in Massachusetts is actually functioning. I think we're seeing coverage that too often suggests otherwise.
Second, it's been interesting to me how much the idea of "education" is for many--including some adults in some pretty important positions!--really closely tied to other things like large brick buildings and yellow school buses and sitting at desks and so forth. There's a lot talk of "back to school" and "reopening" that is really about having buildings that are schools have children in them, regardless of what else might or might not be happening. I think that has a lot more to do with the adults involved than it does what constitutes education.
There has been lots (and lots and lots) of coverage of what students are losing by not being in school. I have, please note, no general argument of the losses that are happening particularly for special education students who learn best (or at all) face to face; for the youngest students; for students who find their connections at school; for students who are missing an atmosphere that is better for focusing than the one they are in; and so forth.
But I also really want to call out the substantial gap between that, and the general push I see to get kids back into buildings (too often termed "back to learning") from those who frequently talk a great deal about the achievement gap and kids who are poor and kids who are brown.
And very very frequently they are talking about kids who are pretty far removed from their own experiences, and in a lot of cases, are talking over and around the families of those same children. I including much of our state K-12 education leadership--at least those who have spoken publicly--in that group.
It really feels as though we've never recovered in state educational leadership from mid-March, when the state's directive to schools was to keep closing for a few days and cleaning and reopening, and the superintendents over a weekend shut the entire state public school system down. I would have hoped that this would have made at least the Commissioner think that clearly he's missing something, and really sit down the superintendents and district leadership and LISTEN. Instead, he effectively has doubled down in issuing directives, often late, frequently out of line with what much of the science around the illness has been, and lately has resorted to issuing threats for those who don't follow.
Meanwhile, I'd be remiss in not noting the good work being done by sections of the Department, quietly have weekly calls with districts on grants and funding and special education, getting P-EBT sorted for families, and otherwise directly offering support.
That hasn't been leadership's message, however.


There is a major, major gap in the level of comfort that families have with sending their children back into school buildings, and it falls pretty heavily along racial lines. Taking that and adding it to the consistent lack of mention, let alone actual policy, from the Governor about the shocking disparities in impact of the coronavirus by race and ethnicity, and we have a massive looming blind spot in how we're coping with the pandemic as a state.
That's the kind of blind spot that gets people killed. Not speaking of the disparities in the impact of the illness by race and ethnicity and then applying that to systems that work with people is, frankly, not doing your job if you're in public policy right now.
And I'd note that it is many of these same communities that are most hit by the state's failure to implement the Student Opportunity Act this fall. And that overlap isn't a coincidence.
We have co-equal branches of government in Massachusetts, and if the executive branch isn't doing what is necessary to keep people safe and provided for, I would hope that the other branches would.

Posted by Tracy Novick at 9:22 AM No comments:

"I thought we should be the envy of the world with our public schools." 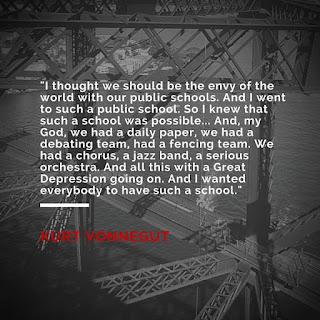 In 2005, when A Man Without a Country was published, author Kurt Vonnegut was interviewed by David Brancaccio on PBS. In the course of the interview, he said the following:

...these people don't know anything about anything. They're incompetent. And, so, yes, they are getting a lot of our guys killed. But, also, they've emptied our treasuries. You know, we can't fix our roads. We can't fix the schools.

It's my dream of America with great public schools. I thought we should be the envy of the world with our public schools. And I went to such a public school. So I knew that such a school was possible. Shortridge High School in Indianapolis. Produced not only me, but the head writer on the I LOVE LUCY show.

And, my God, we had a daily paper. We had a debating team. Had a fencing team. We had a chorus, a jazz band, a serious orchestra. And all this with a Great Depression going on. And I wanted everybody to have such a school. And, yeah, we could afford it if we didn't spend all the money on weaponry.

The full interview, incidentally, is here, and is well worth reading.

We ran three sessions a day at Commerce High School, ensuring that people who might not have a job were getting education and further training for when jobs were available again.

While there were initial cuts, by the middle of the decade, the argument that public education was a center value of the country, and one that needed to be supported, had won out.

The Joint Committee on Ways and Means meets tomorrow. I wish I knew what words would convince those in charge of making decisions that the last thing one should do during the economic downturn from a worldwide pandemic is underfund public education.
Needs are rising, not dropping.
And the Governor's budget does not keep the commitment to our kids.
In the middle of a storm, you protect what is most vulnerable. At least you're supposed to.

I would like us, too, to be the envy of the world with our public schools.

Posted by Tracy Novick at 10:45 PM No comments:

October Board of Ed: budget

Posted by Tracy Novick at 12:10 PM No comments:

October Board of Ed: update on learning and Commissioner's goals

Riley: shift from guidance to "more of a support and monitoring position here in the Department"
support districts under cyberattack
Chromebooks shipping
particularly Rob Leshin on food services
Bill Bell on navigating federal dollars
teaching and learning "standing up resources to use"
"also monitoring districts"
Letters to selected districts earlier this fall, concerned "particularly their misalignment with the metrics and the data"
pleased that most districts are either cleared or pending review
two districts that DESE review teams needs more information from
spoiler alert: they're Watertown and East Longmeadow

"other factors as well" will be monitored by the Department
and there's a slide
in the following areas:
Learning model, learning time, academics, family communication, special student populations all being reviewed  for possible "audits to monitor access to quality instruction" during the school year

districts that are concerned that they have a college, prison, or nursing home
"hoping that when the new metric [from DPH] comes out, it will take that into account"
"have to think about that we have not seen robust transmission in our schools"
"have seen we're able to move on with instruction"
"as we've able to think about that, more letters from DESE will be coming out"
"using the best science and data going forward"

Posted by Tracy Novick at 11:59 AM No comments:

October Board of Ed: STEM week

and Uxbridge High is talking about their innovation program
high school is grades 8-12
and it's nice!