What is the Senate doing differently?

If you'd like to see the line-by-line look at the Senate Ways and Means budget that was released today, you can find it on Twitter. I have also updated the spreadsheet on which I am keeping track of the accounts over the budget process. The line-by-line information is in the Appropriations section; the information about how they're describing local contribution is in the local aid section. 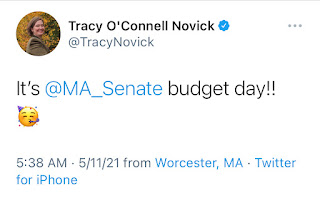 There are many lines that are parallel to the House--as expected, they're sticking by the aid agreement, so Chapter 70 is the same--so I am going to focus here on what is not the same.

First, and most importantly from a local operating level perspective, the use of ESSER funds for local aid increases is back. You might (faintly) remember this from my write-up of Governor Baker's budget (scroll way down), but the language allows for cities and towns to count up to 75% of the district's ESSER II funding (that's the federal aid that came through late last year) towards (or as) their increased local contribution. Every district increases their funding to schools each year; this gives them a pass by using federal aid allocated to the school department as part (or even all) of it.
The House took this language out. The Senate put it back in. Assuming the Senate doesn't amend it back out (which seems unlikely), this kicks the whole mess to conference committee in June.
Why do we care? Towns have been and are passing their budgets for next year daily. How much actual town revenue they need to send to their schools depends on this language. How much actual revenue schools are getting from their towns depends on this language.
Thus effectively, the budgets of both towns and schools (for any that were planning on using this option) are now entirely up in the air.
Not where we want to be in May.

The Senate Ways and Means proposal adds $300K to DESE's line (7010-0005 and yes, I do have that memorized...): $100K is for support for social-emotional learning, and $200K is for support for the use of the federal funding. That last sounds like someone noted that there's a whole lot of money coming through DESE and requiring reporting; this is a question that should be asked locally, too!

The EL/literacy line of 7010-0033 is at $5.9M, which is up from all earlier budgets. They keep combining accounts into this one, and how each iteration does it is different, so I'm not entirely clear how much this is a real increase and how much this is combinations of things.

The earmark account, which the House Ways and Means started at zero, already here has $300K for Partnership for Youth; $250K for Old Colony; $100K for English at Large; $350K for Metrowest mental health. Yes, that last is a line for "the city of Framingham and the towns of Ashland, Franklin, Holliston, Hopkinton, Medway and Natick to address mental health needs in schools" and you are invited to consider where the Senate President is from.

The lines for civics education, financial literacy, and computer science are zeroed out in the Senate.

Regional transportation reimbursement back down to $78,631,818 from $82.1M in the House; it was $75.8M in Governor Baker's budget. I have no idea what the thought here is, unless they're aiming for actual reimbursement levels?

The Senate puts in $250K for non-resident transportation; this was at zero in earlier versions.

The $40M enrollment pothole account is included, as in the House, though the language is a bit different; the House included a decline in transportation spending, which the Senate does not. The language requires a report for November 1 on enrollment changes, plus "no funding from this item shall be distributed until 1 month from the date of the department’s report or December 1, 2021, whichever is later" which is going to mean no one is getting funding from this until December, at the earliest.

The circuit breaker account is up by $5M over the House, BUT it now includes "not less than $10,500,000 to the department of developmental services for the voluntary residential placement prevention program" which means that the actual circuit breaker is cut by about $5M.

The $15M one time COVID grant for districts is zeroed out.

There's a new line 7061-0028 with $6M for a one time grant "to respond to the social emotional and behavioral health needs of students, families and educators" with preference going to districts that can match the funds AND districts that didn't get a lot of ESSER funding, so...not for poor kids, I guess?

School and district accountability is back down to $925,214 as in Governor's budget (was $1M in House).

And I have no idea what's going on with charter reimbursement: the Senate has it as $149,138,383. It was $154,604,742 in House; it was $143,500,000 in Governor Baker's budget in January. The change between House and Governor makes sense, as they changed how the foundation budget is being calculated (remember, that impacts charter school funding), but why the lower number in the Senate?

Extended learning time gets a $2M boost, but funding can only go to districts that were approved in FY21.

The House's $2M in wellness support is zeroed out.

The House added a $400K bias and hate prevention line, which the Senate keeps.

And while the civics and STEM trust funds are funded (at $1.5M each), the 21st Century trust fund (which was in SOA) is NOT included (it's $5M in the House).

And that is what I have! Amendments are due on Friday!