About FY22 from Governor Baker 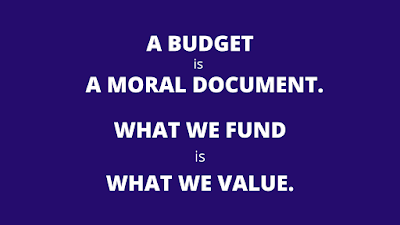 And as a general standing invitation: if there's anything here you don't understand, please ask.
On Saturday, I outlined some of my thinking entering into this budget year. Where are we in terms of that, to start?

As he noted last week, Governor Baker did fund a year of the Student Opportunity Act implementation. As I noted last week, though, this isn't A year; this is the second year. We're $250-300M short from that year. That isn't only about not having had that funding this past year; that's about never having that funding. Implementation is cumulative. If we'd had had SOA implementation last year, that additional funding would be built into the base for this year. It is not, and it won't be next year, or the year after. Whatever good would have been done with those funds--teachers in front of kids, repaired buildings, better services for students and families--is gone.
The proposed budget, unlike last year, funds the low income implementation at 1/7th, which is not what had been proposed last year, which shorted it. The low income count switches, as had initially been done last year, from all direct certification (as we have been doing) to that OR the percentage of low income students in the FY16 budget (when we last did this through collecting free/reduced lunch forms everywhere), which was intended as a stopgap while a shift on low income counting was taking place. That picks up 30,118 students across the state, but keep in mind, those additions are going to be VERY uneven (just to give an example, 1447 of those students picked up are in Worcester). The 1/7th implementation thus is important, as not everyone has an increased count.
The budget overall, though, is based on the October 2020 student enrollment count, as usual, despite the statewide drop in enrollment due to the pandemic, as was covered at the November Board of Ed meeting. There have been calls--which I assume will only increase--to hold enrollment harmless this year, as this is a pandemic-induced drop, rather than one that's happening over time. This is particularly important--and this is a thing that I'm going to keep saying--when you look at where much of the drop in enrollment is:

Of the 37,396 students that have been 'lost,' 17,202 are in preschool and kindergarten. Those are not grades which are required in Massachusetts. It is a fair guess that if this coming year is anything approaching more normal, many of those students are going to come back.
Where are we going to put them? Who is going to teach them? And how are we going to pay for it, if these are students that aren't included in our budgets?
And I'm really asking this, because over 700 of them are in Worcester.
What this means, by the way, is that the overall increase in the foundation budget is over $100M less than last year at this time. The proposed increase--WITHOUT the full low income implementation of 1/7th--at this time last year was $290M; the increase this year over actual last year (which, remember, was no implementation at all) is $176M.
The other variable besides enrollment is inflation, which for health insurance--under SOA, remember, health insurance inflation is tied to the Group Insurance Commission plan average over three years--is 2.78% and for all else is 1.41%. Those are exactly what they are supposed to be by statute.
They also don't in any way reflect the actual increases in costs in lines. I mean, really: is your insurance plan going up by only 2.78% this coming year? Are the costs of gas and electricity and internet going up by only 1.41%?
They won't for schools, either.
Across the other accounts--charter, circuit breaker--there likewise are indications of some implementation of SOA. The circuit breaker increases only by $10M, though, so it's a bit concerning, as MassBudget last year estimated that it would take an additional $25M to implement the inclusion of transportation, as required by the SOA. Likewise, charter reimbursement was estimated to need to rise by nearly $30M to have full implementation; it's up by $16M.
Beyond SOA and these core accounts, it's frankly a pretty depressing picture from a governor who rarely is in front of a microphone without professing his great concern for kids and the driving need based on that for them to be in school buildings. This is his chance to literally put money where his mouth is. Where is it? It's not in building repairs. It's not in mental health services in or out of schools. It's not in extended day or summer programs. It's not in additional staffing supports for schools. It's not in any of the areas that anyone has suggested need additional support this year. It's just...not there.
Moreover, the Governor even manages to remove some of the support in this line being given to schools by the federal government. As I noted earlier this week, the second round of pandemic support to schools, passed as part of the big federal package at the end of December, is going to start to be available for applications soon. Districts can find the amount dedicated to them online here.
...except it turns out they can't. Governor Baker is proposing in his budget that towns and cities be allowed to count up to 75% of the federal grant to schools towards the increase in their required local school spending; the language is on the Chapter 70 page under "required local contribution."
In other words, the additional aid for handling COVID that the federal government specifically set aside for schools could instead be claimed by the city or town as school operating expenses.
I have a couple of problems with this. First, it isn't clear to me that this is the intent of the funding; this effectively takes emergency pandemic school aid and substitutes it for municipal operational funding. It also seems to me--no, I'm not a lawyer--to be creating a terrible legal precedent. This funding is like Title I or IDEA: it is a grant that is specific to schools. Those grants aren't touched by towns or cities; there's a set-aside within them for whatever "writing the checks" sorts of services the town may do, but they certainly don't have allocation authority. This is allowing the municipal side to allocate school funding, and to do it in both municipal and regional districts.
I don't think it's right, I question its legality, and its going to be an absolute mess at local levels.
It's not up to local school districts to make up for the stubborn refusal of Senator McConnell--who I would note is of Governor Baker's own party--to pass local aid assistance. That's on him.
And putting a budget that supports our students is on Governor Baker. While this makes a better than last year's effort at SOA, it isn't last year. It's ten months into a pandemic and it's two years into the Student Opportunity Act. Neither of those show up in his budget.