...regarding in school transmission

Early last week, I received a lengthy, footnoted letter from a Worcester Public School student, pressing for a return to school buildings.
Let me note first: I do so love getting emails from students! or any contact at all from students! Keep those coming!
It repeated--not surprisingly, as this has been the main push in much of the press--the idea that schools were safe from COVID transmission. As I haven't done a blog post on that--I just keep tweeting out links to things--I am excerpting here that section of my response to the student letter, for both myself and others who might find it useful. 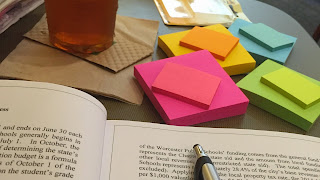 ...And none of that is to speak of the fear that surrounds transmission, because there is certainly transmission in schools. Multiple Massachusetts superintendents have publicly noted that they have, through their contract tracing, found transmission within their buildings; here, for example, is Framingham from the beginning of December, and Hudson from about the same time. This is in line with what was found by a study published in the Lancet back in early December: there is in fact school transmission.

The science of transmission of COVID-19 in schools is something that I've been reviewing with care since last spring.
It has been apparent from fairly early on that children more often get coronavirus asymptomatically; the CDC, for example, notes that as many as half of COVID-19 cases in children may be asymptomatic. On the same page, they note the main issue that has plagued us from the beginning:

The true incidence of SARS-CoV-2 infection in children is not known due to lack of widespread testing and the prioritization of testing for adults and those with severe illness.

Without widespread testing of all--including asymptomatic!--individuals, we simply do not know the rates of coronavirus among us.

We do, though, have research from places that have been doing testing. The models, which like those you cited, are from Europe, give us troubling perspective on the reality of COVID-19 in schools. In mid-December, the German magazine Der Spiegel had what has been one of the better reviews of this research as of that date. As you'll see in the piece, Austrian researchers have been, since late summer, been conducting research in 240 schools in Austria in which students and teachers are being regularly tested. This weekend, the Wall Street Journal included an update of that research in an extensive article they did on schools across Europe now closing; they've found:

In Austria, a nationwide survey by universities and medical institutes found that children under 10 showed a similar rate of infection to those between 11 and 14, and that the children in general were getting infected as often as teachers, said Michael Wagner, a microbiologist at the University of Vienna who oversees the study.
“That is very different to what has been claimed for months, that younger children are less frequently infected,” said Mr. Wagner. The study, funded by the government, regularly analyzes samples from up to 15,000 children between the age of 6 and 15, as well as teachers who show no symptoms.

(The WSJ  piece is paywalled; let me know if you'd like me to send it to you.)
The United Kingdom has been widely held up for keeping schools open even during their fall lockdown. The U.K. also is regularly testing 2% of their population. During that fall lockdown, when just about everything but schools were closed, (to quote from the WSJ again):

Scientists also point to data from the U.K.’s Office for National Statistics, which conducts a weekly random survey of the population. Just before the Christmas break, when schools were still open, the positivity rate among children was higher than in most adult groups, especially in those older than 11.

You can find the details of that in this study from December. As you may know, the U.K. has, in this most recent surge, now closed their schools. This is in part due to the new more contagious variant--now in Massachusetts--but it also is because community rates across the U.K. are now so high; as noted of open schools in Utah in the AAMC piece you cited:

That stuns Benjamin Linas, MD, MPH, an associate professor of medicine and epidemiology at Boston University School of Medicine who has advocated for opening schools under strict safety measures. “You can only open your school safely if you have COVID under control in your community,” Linas says.

This is in line with two recent pieces of research done in the United States, summarized well in this Chalkbeat piece. Having schools open where there are higher caseloads of hospitalization for coronavirus, or (in the other study) simply high rates of daily cases further contributes further to community spread. We in Worcester, and across Massachusetts, exceed the rates found to be of danger in the studies; the REACH study on hospitalization links to a spreadsheet that updates county hospitalization rates across the country. It was the CALDER study on daily rates of positive cases that I found particularly alarming, as we've exceeded those rates for some time. You might find this Intercept piece looking at recent research also of interest.
The relative safety of schools thus is not that which has too often been cited in the press; On the Media had a useful review of how we got to a place so misleading in their show late last week.
Schools can and do contribute to community transmission, and we must, above all, hold the lives of those in our district at high enough value to appropriately manage that.
...

While appreciating the concerns regarding remote learning, I also want to be realistic about them. The Christakis study, which I reviewed when it came out, was flawed in a number of significant ways, which led (after much online scholarly discussion) to a letter to JAMA criticizing its publication. Most notably from my own perspective, the loss of learning was based on a single study of an Argentinian teachers strike during which students received no instruction, which is of course not at all the case for students now; the study itself warned against using it to draw these sorts of conclusions. The assumption as well that those lost "years" of learning translate into lost years of life also simply does not follow.
Posted by Tracy Novick at 8:39 PM