I think I've probably missed a couple of chapters of updates here on the blog, but, as we had a fairly lengthy discussion Thursday night during what was otherwise a pretty short meeting, I thought I should add something here.

With the continued shortage of Durham buses, or, more specifically, drivers, and with the high schools back five days a week, the district has had to insert a double first run on a number of route like so: 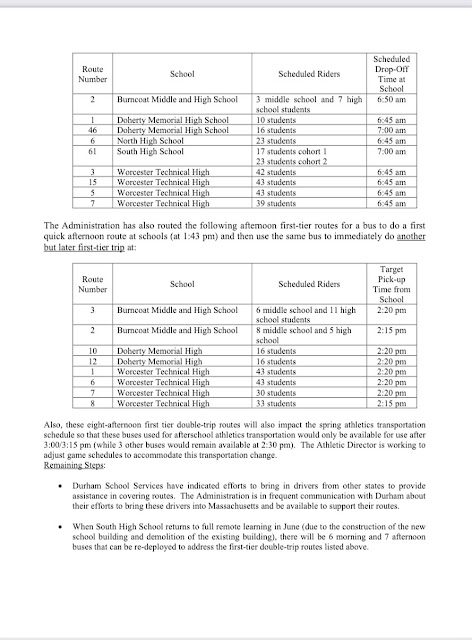 Most buses do two or three runs already: they'll do a high school route, drop those students off, go back out and do an elementary route, drop those students off, and go back out and do a later elementary route. This has some of our--and I do mean Worcester Public School-run buses--doing a high school run, then doing a second high school run before they go do the second tier. In order for this to work (and I use that word reluctantly), the pick up for those students is really (as you can see) early, and the students are being dropped off at school as early as a half hour before school starts. As we said on Thursday, if that's a family's choice, that's one thing, but when we are doing it--and then, in some cases, leaving students outside--that's not okay.
This is the continued impact of having fewer than our contracted number of buses through Durham, as also shown in the memo we received for Thursday's meeting: 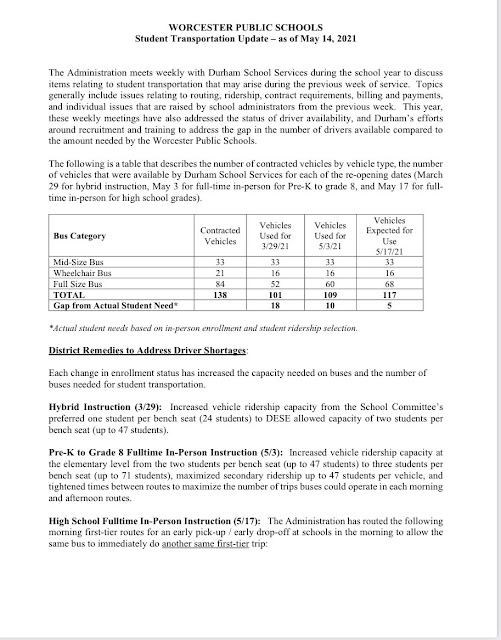 I went through and added another row to the chart: on 3/39 we were short 37 contracted buses; on 5/3 we were short 29 contracted buses; on 5/17; we're short 21 contracted buses.
Note that as of Thursday, we were a month out from our vote to send a letter of breech of contract. We were told Thursday that the letter had not yet been sent. We passed an item that it be done so and that we receive the letter, signed by the Mayor as our chair.
21 contracted buses times two or three tiers is a lot of students impacted. And that in turn is a lot of families impacted, and a lot of schools impacted.
This isn't just about the frustration that this creates for everyone (including the rest of our staff!) involved. We run buses so students can get to and from school without that being a responsibility of families exclusively. When we push this back onto families, we increase inequity, as the families who lack resources--of time, of private cars, of additional help--are those whose students are then not able to get to school on time or at all.
Posted by Tracy Novick at 10:53 AM