The Worcester School Committee deliberation on the proposed FY23 budget (warning: link is to the whole document, which is 444 pages!) began Thursday at 4 pm.

Can I just say again how much I appreciate having a really good budget document from which to work? It is a TON of work to put together a document that is as comprehensive as the one we get, and it is largely the work of two people--Brian Allen and Sara Consalvo--and I just can't say often enough how much I appreciate it. It genuinely makes me better at my job. I'm also going to use a bunch of the illustrations from the budget as I talk about it here.

The sequence in which we take the accounts is here; we got through the non-salary account on Thursday; we'll start with the salary accounts (specifically Custodial Salaries) on the 16th.

Here's the video of Thursday's deliberation:

I haven't said much here on the blog about the proposed FY23 budget, which partly is because I've been swamped, but also because it comes at an interesting time: the new fiscal year begins at exactly the same time the new superintendent does. Thus we're deliberating a budget prepared by an administration that will not be the one overseeing it, and the administration coming in has not been consulted in its preparation.

As such, I, in any case, am seeing this as round 1, as I said on Thursday. I am sure that we'll have recommendations from Dr. Monárrez regarding changes once she's here; it's clear from the schedule she's keeping when she is in the district next week that she's preparing to hit the ground running.

A few things to know about the budget:

It's the first time the Worcester Public Schools budget is over $500M. Keep in mind: that is all revenue sources, and $50.8M of that is ESSER (federal pandemic aid) spending. Even so, the general fund (non-grant and revolving fund) spending is $417M, which is a $29.3M increase over last year's general fund.

It's a lot of money. So where is it going? 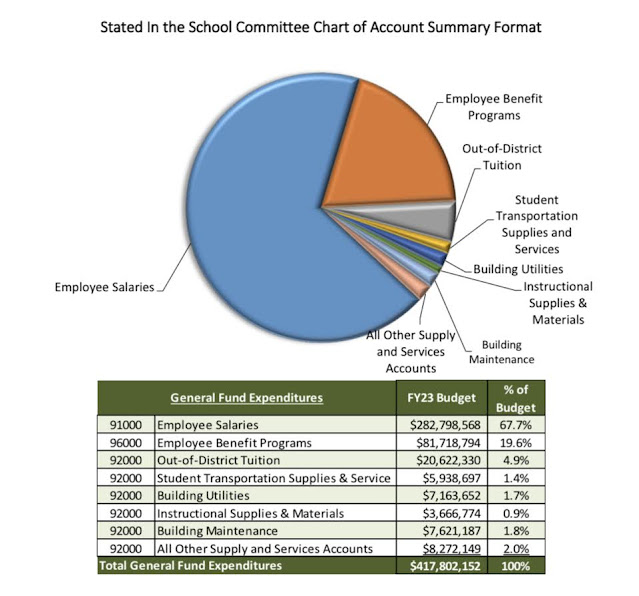 Mostly people! I say this a lot: education is a people-driven realm of work, and well it should be.
(Editorial comment: Do note that much of the "employee benefit programs" line above is health insurance--it's $57M of the general fund budget this year--and if the U.S. were like many other countries, this would not be a cost carried by the schools.)

Who are those employees? 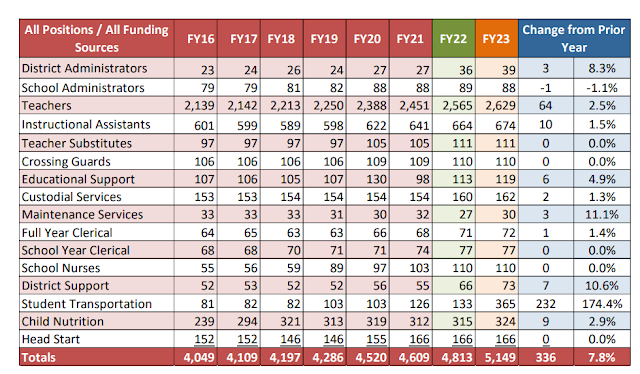 This is from page 25
One of the main questions of every budget is where is the increase going, and we have a handy single page image for that:
This is page 132.
It's important to note that some of the above is one-time funding. You can find an updated account of what we're doing with our ESSER federal funding on page 162:
I am going to leave it there for now, lest I stray into deliberation ahead of budget passage.
Posted by Tracy Novick at 3:28 PM