At the School Committee Meeting that was held on Thursday, February 27, 2021, Miss Biancheria made the following motion:

Request that the Administration provide, in a Friday letter, any updates on the Roosevelt School traffic problems once contracts are signed.

Response from the Administration.

The Worcester Public Schools Five-Year Capital Budget allocated $1 million for the Roosevelt School traffic reconfiguration project from the FY22 allocation (see page 180 of the budget book). However, with the city’s recent purchase of several Becker College properties,  the WPS is expected to fund the purchase of the Weller Academic Building through a reduction of its capital budget allocation.      Since the acquisition of Becker College properties was not included in the district’s five-year capital plan, the district must defer $3.5 million of projects listed on the five-year plan to a later date.   The WPS Administration is working with the City of Worcester Administration to shift project funding and develop a longer-term collaborative capital funding strategy.  The district will evaluate the Roosevelt School parking lot funding plan as part of these adjustments.

The entirety of the Worcester Public Schools' capital budget is $3.5M each year, as follows from page 192 of our budget: 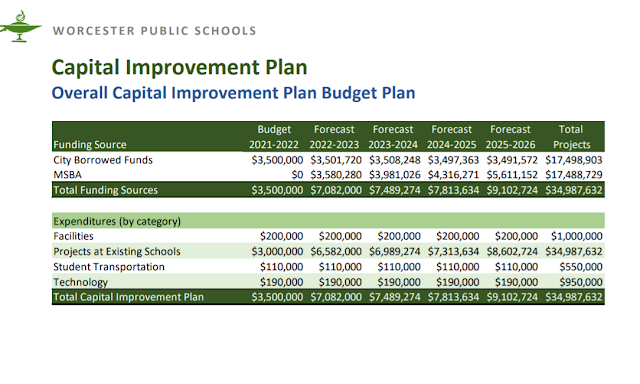 Effectively then, the capital budget of the Worcester Public Schools is being zeroed out for an entire year to purchase buildings on which the Worcester School Committee was not consulted and had no say in.
What will be postponed? Start with page 188. The memo says that it is the five year plan, so it won't necessarily be this year's plans.
Posted by Tracy Novick at 5:02 PM