It's a staffing issue

You may have caught in passing the mention from today's Boston Globe that the Department is providing six million KN95 masks to school districts for staff when they come back to school next week:

To help protect school employees, the Massachusetts Department of Elementary and Secondary Education has supplied 6 million KN95 masks. That’s enough for one mask per day for each employee, including teachers and bus drivers, said a department spokeswoman.

Below, this appears to be predicated on there being about 100,000 staff in Massachusetts, so that's 60 days of masks, assuming one per day, which gets us (with February break off) to mid-March or so.

This afternoon, the Department announced that they were sending out 200,000 tests to districts, allowing two tests per staff member:

...strongly encourages all school personnel take one of the at-home antigen tests no more than 24 hours before they return to work

It has been noted by others that the Department said they're spending $5.6M on this last, which would be $25 per test, and then the next email in my inbox had this headline: 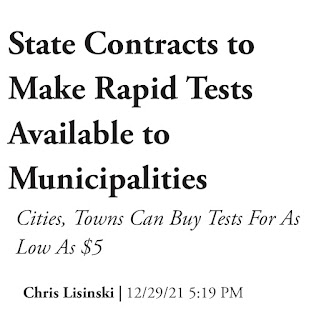 I assume DESE paid what was being asked for what could be had now.
The above is occurring during a school vacation week and without warning. Masks are coming to central distribution points, from which districts need to retrieve them. I assume tests are likewise being sent out the same way, at which point districts will have to find a way to get them to staff, who are also on vacation.
As has been noted, we have been warned for weeks that this week's vacation is of concern. It's why districts that could manage it sent tests home with students before vacation for their use. Districts largely didn't have access to enough tests, and thus we have what it is difficult to describe as anything other than a very late effort.
Students, of course, are not mentioned in any of the above--we have nearly a million of them in public schools in Massachusetts--and they're also going to be coming back into buildings on Monday morning. There are districts in Massachusetts that were among those to get tests in students' hands before vacation; some of the higher risk communities that had received the state distribution focused on schools. Not all did, and that would leave many districts out, regardless. Lines at testing centers have been long in the places where those tests are available; at home tests are difficult to find.
And the COVID rates in the state have never been this high before. As of last week's data, 41% of 5-11 year olds, 77% of 12-15 year olds, and 78% of 16-18 year olds had at least one dose, which doesn't appear to be enough to blunt the force of the virus.
There was a good deal of online (and elsewhere) outrage this week when the CDC rolled back quarantine recommendations, following staffing concerns expressed by an airline executive, after a weekend in which thousands of flights were cancelled.
The above, on the other side, is based on protecting staff. But it is still focused on staff.
I have two concerns as we head into this holiday weekend, which has school on the other side.
The first is for students, most of whom were not sent home with tests, most of whom don't have access to free testing (as we even do in Worcester, if you can get there and can stand in line in the cold), most of whom simply, I'd guess, are not going to be tested before Monday morning.
And many of whom are not going to be walking in the door on Monday with masks equivalent to the above.
The second is actually a staff concern. The state positivity rate right now is over 13%, and that is only of those tested at medical centers; it does not count at home tests.
If anything like that many of the tests the state is sending out to districts to get to staff come back positive between Sunday night and Monday morning, what's our plan for Monday?
UPDATE: the above was posted prior to DESE's email to superintendents Thursday night that the tests would not, in fact, be in on Friday as scheduled.
Posted by Tracy Novick at 7:50 PM