How much has Massachusetts really been trying on school funding?

This year's Shanker Institute report on the adequacy and fairness of school funding, which uses 2019 data, gives a stark picture of where we have been in Massachusetts.
2019, of course, is when, in November, we FINALLY got a revision to the state formula, one-sixth (mostly) of which was FINALLY implemented this current fiscal year.
The work of Bruce D. Baker of Rutgers University), Matthew Di Carlo and Kayla Reist of the Shanker Institute, and Mark Weber, also at Rutgers University, the report looks at effort, progressivity, and adequacy; that is: how much are states actually trying in using the fiscal resources they have for schools, and do they make sure poor kids are getting more resources, and are districts getting enough money to get to outcomes needed.
And we don't look so hot, Massachusetts.

First of all, given what we have in Massachusetts, we really aren't trying all that hard on funding schools. Check where we are on the map: 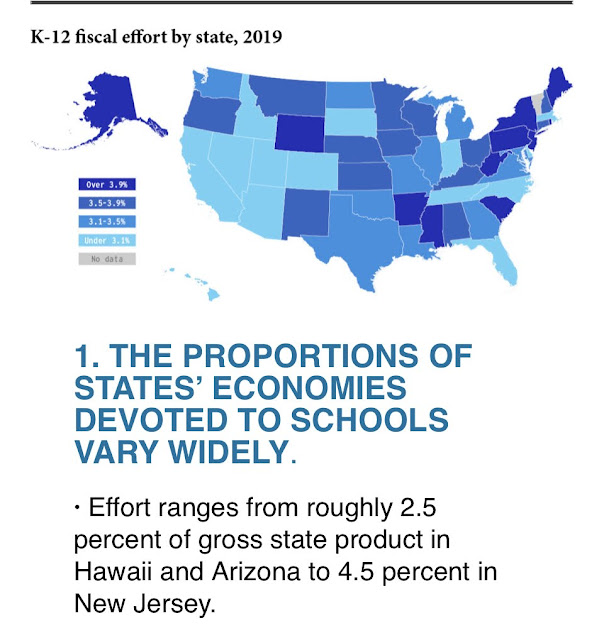 If you take a look at the state level detail, it's honestly kind of even worse: our effort level ranks #43 in the nation (out of 49). There's a headline you're probably not going to see in the Globe.
A few other stats from that state profile on effort:
In other words, most other states try harder than we do to fund public education.

While the state effort had increased prior to the recession, there was a decrease of 0.42 percentage points in MA's effort during the “K-12 recovery” period of 2012-2019.
In other words, recently, we've been going backwards.

Okay, but what about adequacy? Surely we are giving enough?
(That sound you hear is the hollow laughter of Gateway cities, among others.)
I'd argue that we already know the answer to this: 2019, which is the same year being compared here, is also when the statewide average spending over foundation--over what the Mass General Law itself calls an "adequate minimum"--was 31%. In other words, towns and cities (because remember, that addition is always local funds!) decided on their own that a third more money was called for than was required.
On this one, Massachusetts does better: a actual per-pupil (PP) spending in each state to cost model
estimates of the amount required to achieve U.S. average test scores shows Massachusetts as $997 above that amount, which places us tenth.
...I think that most of us think that we should be doing more than aiming for average U.S. test scores.
On progressivity, the news again is grim: 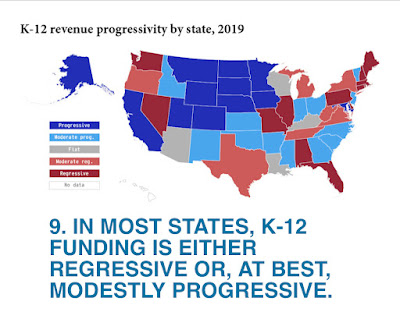 Oh look: Massachusetts is a red state.
This measures "the degree to which states provide greater resources to districts serving higher-need students." This, remember, is the entire point of the foundation budget. And how have we been doing at the state level?
42 and 43...leading the nation, indeed. Check out the chart: 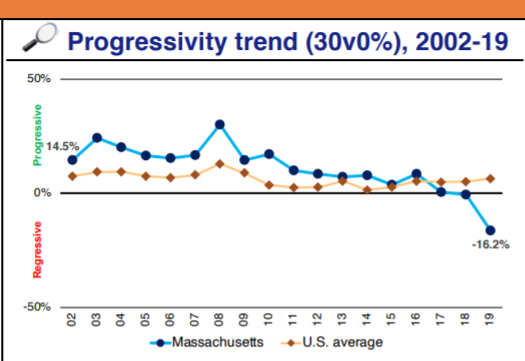 We've been falling since 2010, dropped below the nation in 2017, and plunged straight into regressive territory in 2019.
Now again, let me note: this is 2019 numbers. This is pre-Student Opportunity Act, and much of this is what the SOA is intended to deal with.
It should, however, be a statewide scandal that Massachusetts, which claims education as what we do and what we're about, has been doing so very very poorly on these measures. It should be in headlines, it should be active discussion in the Legislature, and the Board of Ed should be outraged that the state has let it fall so far.
This also absolutely should be part of the story we tell about our districts: this is a Constitutional responsibility of the state, that the state has not fulfilled and has let fall to towns and cities, that the Supreme Judicial Court said in 1993 was not their issue alone. And yet it has been left to them, some of which we know, again by the SJC decision, are unable to fulfill it.
No discussion of Lawrence or of Holyoke or of Southbridge, for certain, but also no discussion of Worcester or Fall River or Pittsfield should ever be conducted without reference to this. The state has failed students in those districts, make no mistake.
Posted by Tracy Novick at 10:29 AM

Email ThisBlogThis!Share to TwitterShare to FacebookShare to Pinterest
Labels: around the state, Baker, inequity, state budget