Tonight, the Worcester City Council agenda has a report on FY22; remember, that's the fiscal year that ended June 30. As City CFO Tim McGourthy notes, "while FY22 has ended, there are still year end transactions being processed that will change the final year-end financials from the attached reports." So we don't yet have the full picture here of where the city ended up for the full year.

I've always found the city's financial reports a little...opaque(?), so I thought I'd do a smidge of a post here on what you can see here of the Worcester Public Schools' financials. In order to do this, I cross-referenced this against the FY22 WPS budget financial section and the September (2021) budget update. 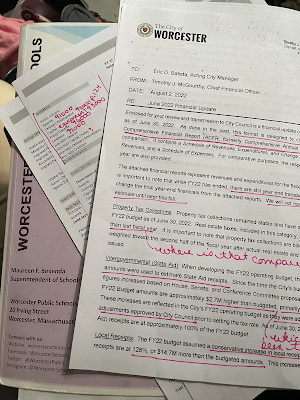 (Did you know that our budget updates have their own page? I use it a lot!)

As noted in the memo, the reason there's a difference between the adopted and actual (for the school lines) is the adopted budget (in June) was on the Governor's budget, and last year (like many years, though not this one!), the Legislature's conference committee budget increased (in particular) education. This is why both the School Committee and the City Council passed updated budgets later in the year.

For spending, you'll see the report looks like this: 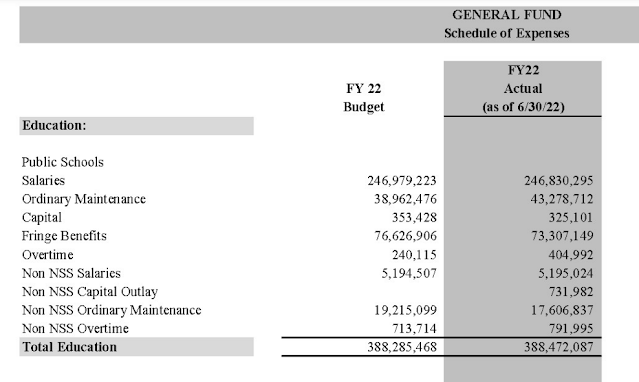 So we have the adopted and actual as in the revenues, but why are there these divisions?
The answer is on page 124 of the FY22 budget:

(It's actually MGL Ch. 44, sec. 32)
So the city does that, and then replicates it again for the parts of our budget that don't "count" towards the city's required spending (the bulk of that is transportation).
Now, while the cost centers we pass the budget with cite those, so you can go through our budget and make this work, this isn't necessarily all that useful a way to think about our budget. This is really about all the City Council gets on their side when it comes to the city budget, though, which makes, I think, it more difficult to see where the money goes. That's how the municipal reporting works, though.
Tellingly (I'd say), the law itself says:

The foregoing shall not prevent any city, upon recommendation of the mayor and with the approval of the council, from adopting additional classifications and designations.