Do we have an agenda for you!

The Worcester School Committee meets twice during the summer--once in July, once in August--with our July meeting being this Thursday. You can find the agenda online here.

This is of course Dr. Monárrez's first meeting as superintendent, and thus the report of the superintendent is her entry plan, which is linked through the banner on the district website. It's set up with lots of listening in chapters: 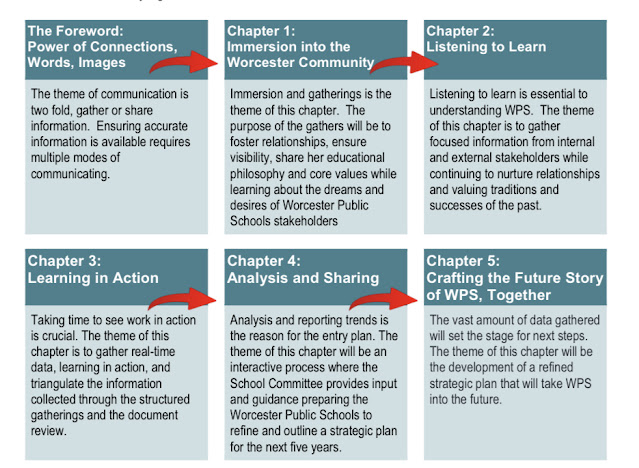 That plus item gb 2-206 and following are those I think are the most important on the agenda. Dr. Monárrez proposes the following:

To consider and approve a proposed reorganization of Central Administration positions to include the establishment of the positions of: 1.) Deputy Superintendent, Chief Operating Officer and Chief Financial Officer; and 2.) Assistant Superintendent, Teaching and Learning; and to approve the proposed Job Descriptions for those positions.

From the position descriptions, this would put all operational functions under Mr. Allen, in addition to those he already oversees, as well as day-to-day operations ("builds and leads daily operations of the district office"); Dr. Morse would be overseeing the offices having (as the title names) to do with teaching and learning (thus special education, social-emotional learning, multi-lingual).
I (of course) have to save my comments on this for Thursday, but, as I noted previously, superintendents putting together administrative reorganizations is common practice. Note that these are two longstanding Worcester Public School administrators.
Other things on the agenda:
The Committee is meeting in public session first, then moving to executive session, which has two grievances and successor bargaining with two bargaining units.
Posted by Tracy Novick at 4:57 PM