Update from Thursday in Worcester

If you're trying to figure out why it is that there has been this uprising in the community around the renewal of Superintendent Binienda's contract, I highly recommend reading this piece from Bill Shaner (having quite a week) of Worcester Magazine about the superintendent's response to their work on student perspective on their teachers and teaching:


In the meeting, both the students, others present and Binienda herself confirmed she made a comment about Asian students not wanting to be teachers. They don’t want to be teachers, she said, because they’d rather be doctors or work in tech.

If you don't see why the superintendent of a diverse district making this comment is a problem, I would suggest reading up on the myth of the model minority and of stereotype threat. Also statements beginning "X [group] doesn't" is a problem.

Further, the students subsequently were called into their school adminstrations' offices--people who wouldn't know of what had happened were it not for calls from the superintendent--


They said, and the superintendent confirmed, two of the presenting students were called to their respective principals’ office in the days following the presentation

The superintendent said that one was to follow up on a teacher asking about a student's immigration status, but the student's characterization of that is not positive:

That is not, obviously, the main concern in a teacher asking about a student's immigration status.
This is not at all outside the experience of many students in Worcester.
This ongoing reversal among some of who is threated by racism is represented as well by John Monfredo quitting the Mayor's Commisssion on Latino Education over a meme that quoted him, leading to this column by Clive McFarlane (also having quite a week)

Thus it perhaps is not surprising that this is the front page of today's Telegram and Gazette: 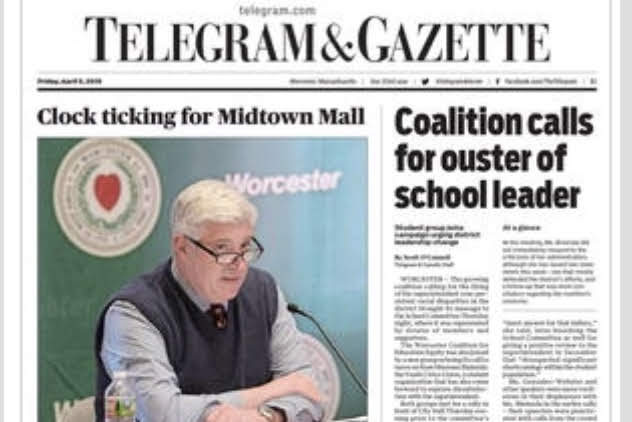 That article is here. Worcester News Tonight covers it here.

More, of course, as I have it.