When the paper of record is wrong 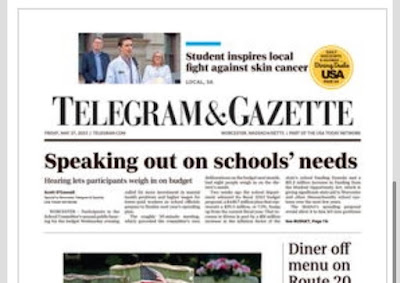 We had the public hearing on the proposed FY23 Worcester Public Schools budget on Wednesday, and we had people COME which is always the first thing, and so we heard from parents, a student, and multiple staff about what we should be considering about the budget as we enter deliberations next week.

As some of you know, this blog started because I was frustrated by the holes in the Telegram's coverage around budget in particularly, and so it feels either full circle or something more frustrating to note that the article gets what seems to me to be one of the core pieces of information--how much our budget is--wrong.

The third paragraph in piece says this:

Two weeks ago the school department released its fiscal 2023 budget proposal, a $448.7 million plan that represents a $30.5 million, or 7.3%, bump up from the current fiscal year. That increase is driven in part by a $18 million increase in the inflation factor of the state’s school funding formula and a $13.2 million increase in funding from the Student Opportunity Act, which is giving significant state aid to Worcester and other Massachusetts school systems over the next few years.

One of the things I take some pride in is that I spend time and attention to the budget (in fact, I'm writing this with budget materials spread around me, as it's how I'll spend yet more time today). I generally know pretty solidly what our numbers are.
These I not only did not recognize: when I went back to our budget, I couldn't even figure out quickly where they were even coming from! The opening sentence of the executive summary of the budget is:

I even went back to last year's budget to see if it was from there (it isn't).

When I pulled open my copy of the presentation by Mr. Allen from that night, I finally found it: slide 7:

Here's the problem: That's literally midway through the calculation to get us to our bottom line:
The $448M is just...not the Worcester Public Schools' budget for FY23. It's not. At all.
That isn't, of course, the main point of the article, which is about some of the public testimony we received, particularly on student mental health and on pay for paraprofessionals.
But facts matter. And it isn't my blog that's going to go forward as the record of what happened; it's the T&G.
This is a proposed budget in which total spending reaches over $500M for the first time in Worcester history. A substantial amount of that--$50.8M--is one time funding from ESSER, that either goes away or is proposed to transition into our Student Opportunity Act spending as it phases in over the next few years.
That also matters. It's core to budgeting in future years. People in Worcester need to have some understanding of that.
I am always going to recommend that you review the executive summary; it not only talks about where our money comes from, but where it is proposed to go. I hope to put something up here that talks a bit more about that; frankly, I'm still wrapping my own head around if it's doing what we need it to. If you need the proposal in one image, Mr. Allen has given you one:
But again...facts matter.
Posted by Tracy Novick at 11:30 AM