I feel as if I am back in the days when I started this blog, when there'd be the single article about the School Committee meeting, and anything else that happened, you didn't hear about. While admittedly both voting to move to fully in-house transportation and voting to start a national search for a new superintendent are news of the headline making sort, there are other things that happened at our meetings in the past two weeks. 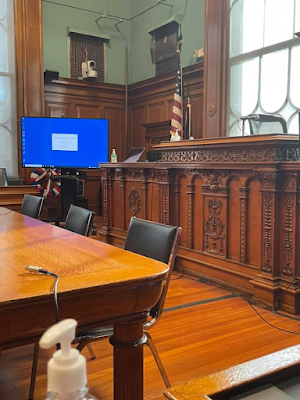 Here's a rundown on the highlights:

Over the past number of weeks, we've ratified contractual agreements with EAW units A&B (that's anyone classified as a teacher plus assistant principals and the like); drivers and monitors; custodians; computer technicians; 52 week administrative secretaries;  and educational secretaries. In every case, those contracts brought them at least up to date as of the close this past fiscal year OR brought them up through the end of this one (this last is the case with the teachers). As a result, the School Committee this past week voted an increase for the non-represented (non union) employees, which is everyone from administrators to crossing guards.
I can't talk out of turn on the units that are outstanding save to say that negotiations are ongoing.

While the report out on the August 18 Finance and Operations subcommittee meeting attracted attention largely due to the recommendation to move fully to in-house transportation, I don't want to overlook the closing of the fiscal year. Worcester had, remember, a $372M budget for FY21, after we cut $16M once we finally got a state budget. For municipal districts, anything that isn't spent--down literally to the penny--goes back to the municipality to be certified as free cash for the end of the year. That is a difficult and complex process.
And how much did the Worcester Public Schools give back this year? 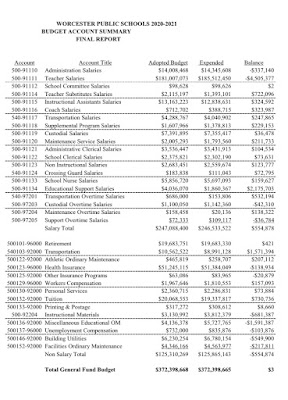 $3.
Thus, if a dollar went to the Worcester Public Schools for education last year, that's what it was spent on.
And so when folks ask "how can you have confidence in the projections for transportation?" the answer is this: when you have a finance office that has been doing this (and the associated budget transfers) and the back and forth with RTTT and grants that disappear during budget seasons and all the other swings that we've seen over the past more than a decade, and yet year after year, these are the results, you trust your people and their work.
At our August 26 meeting, on Mr. Monfredo's motions, we voted to send mandating vaccinations of our employees to executive sessions to take up as part of negotiations. I'd note that the EAW leadership has already been public on their agreement with this, so it's largely a matter of working out the how and when. There are negotiations going on now regarding bargaining around issues related to back to school.
Several of us have received concerns about how lunch is being eaten in this return to school in the pandemic time, so I had filed an item at the August 26 meeting, urging outdoor as possible and creativity everywhere. While some schools are doing some very neat things, I've continued to get heightened concerns from families around what looks a lot like regular operations at some schools, however.
I had also filed at the August 26 meeting a request for the list of outstanding contracts the superintendent has with employees; that is, the employees whose contracts are not collectively bargained but are directly with the superintendent. We have a number of them that are expired for a year or more. That report was due back at our meeting on September 2, but we did not receive it.
At our August 26 meeting, Ms. Clancey filed an item regarding the concerns the neighborhood around Lincoln Street School has had with community homelessness impact on the school. We heard something of an update at the meeting of attendance at the community meeting regarding this, as well as work going forward.
At our September 2 meeting, Ms. McCullough filed an item regarding parking for students at Doherty during construction, which there are a few things going on with.
Also at our September 2 meeting, the Committee on a 6-1 (Biancheria opposing) vote agreed to send a letter to our delegation requesting that the state Department of Public Health mandate COVID-19 vaccinations for students as it is permissible, and, if that does not happen, request that the Legislature do so.
We also asked the administration to look into the recently released update that districts may provide remote education to students who are ill or quarantining due to COVID. We were told, however, that the Department recently said that they'd bar districts from using remote learning for snow days.
Next meeting of the Committee is September 23 (moved from September 16, which is Yom Kippur).
Posted by Tracy Novick at 9:09 PM