I posted a thread on this yesterday on Twitter, but I've done a smidge more digging and I think I know where this is coming from now.
I missed the initial article from earlier this month announcing that Superintendent Binienda had moved into North High School while Principal Lisa Dyer was out on medical leave and did not intend to appoint an acting principal in the meantime. Offhand, it's not clear to me that it's legal to fail to have a principal; the relevant MGL is Ch. 71, Sec. 59B:


The superintendent of a school district shall appoint principals for each public school within the district at levels of compensation determined in accordance with policies established by the school committee. Principals employed under this section shall be the educational administrators and managers of their schools and shall supervise the operation and management of their schools and school property, subject to the supervision and direction of the superintendent.

The section then goes on to enumerate the quite extensive list of responsibilities and powers of the principal under the Mass General Laws. Those are specific, distinct, and discrete from the powers and responsibilities of the superintendent.The union president being okay with it isn't what we're looking for here; I'd be interested in a legal opinion, preferably one from the state.

Likewise, of course, having the superintendent overseeing just over a thousand students of a 27,000 student system directly is less than reassuring. Worcester needs a superintendent who's actually running the system.

Yesterday's follow-up article, revealing that the superintendent intends a turnaround plan of some kind, wasn't any more reassuring. The opening comment:


“North High’s performance on the MCAS (this past year), for the third year in a row, showed no progress”

...is simply not true. You can find North's MCAS data over time on DESE's website here. You don't have to know about CPI and PPI and the rest to tell what the lines are doing. Here's a screenshot of the charts for students scoring proficient or higher, 2013-2017. 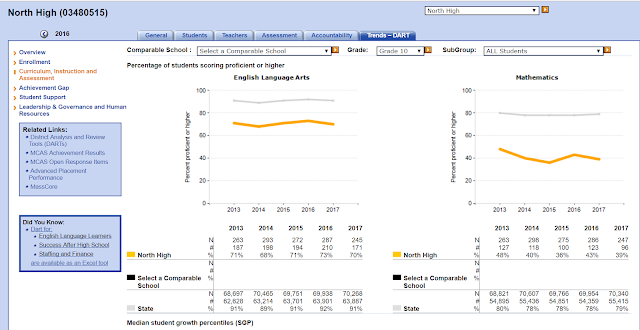 Are those lines trending steadily downward for three years? No, they are not. They did go down this past year, but they had gone up the year before.

More to the point, look at the median student growth percentiles (from the same page):

Have they bounced down? Yes. Have they gone down for three years? No. Again, they were up before they were down.
We can't panic every time there is a year of down results. Analyze, plan, figure out what had happened, absolutely, but some classes are stronger than others (and that's why the state doesn't judge on a single year's worth of data, either).


Now, are those fantastic results? No, they aren't. And the district has been concerned and working on North in past years. There are also things that matter besides MCAS, and those things, because North High is a high school, the state even judges the school on. Here, for example, is North's dropout rate since 2012: 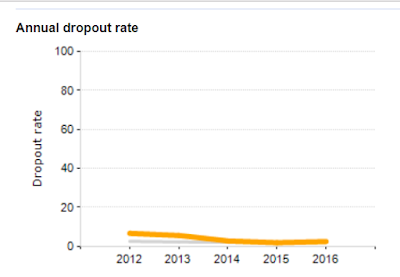 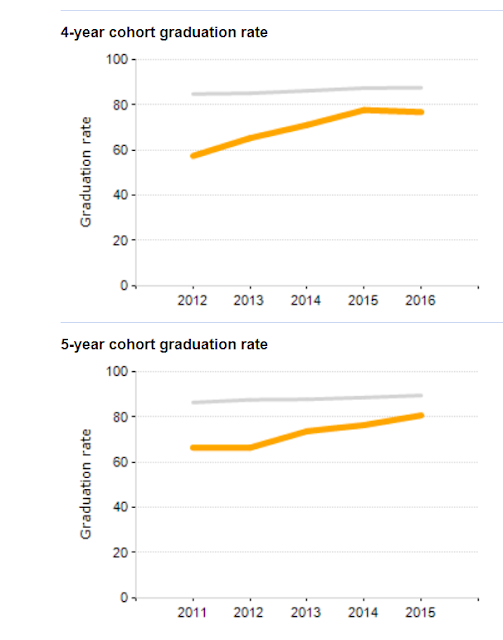 Again, none of these are my numbers; they're what the district has reported to DESE.
So let's say that I'm coming into this a bit skeptical that North High is suddenly in an emergency situation.

However, I did have a chance to poke around a bit more this afternoon, and I've come across what I think is probably driving this.
You'll remember that only high schools were assigned levels this year. That means that this exercise, where we set the schools in order by percentile, suddenly only involves high schools (save the Level 4 and 5 elementary schools). Remember that you want a higher percentile (those are better), and take a look at the list (I clicked to set them in order by percentiles and then scrolled down until I found anything, as nearly all the elementary schools don't have one):

So from the top here we have Madison Park (Boston's vocational school, which is undergoing another round of turmoil now); Holyoke's Dean Vocational (which was under state receivership before the district was); then Brighton High, New Bedford High, High School of Science and Tech in Springfield, Excel High, all of which are Level 4 schools already. The first Level 3 school we hit is North High in the third percentile, before going back to Level 4 again with West Roxbury.
Remember, though, that the Level 4s are always at the Commissioner's discretion, which is how we find this if we scroll further down: 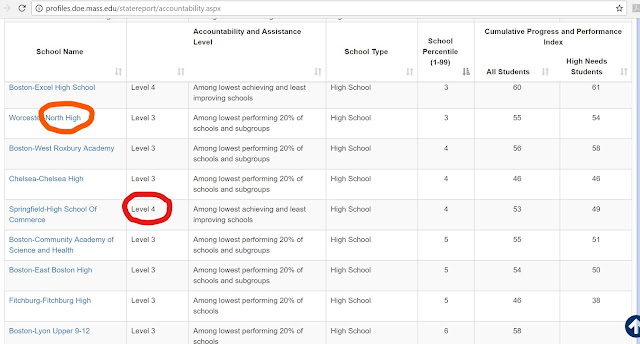 Yes, that's Springfield's High School of Commerce, a Level 4, coming in after North (it has a higher percentile this year).
All of which is to reiterate that it is a mistake to think that this all comes down to MCAS scores. It doesn't, and it never has. What does the state look at?

By the by, Worcester is already a Commissioner's district, so that threat won't stick.
Posted by Tracy Novick at 9:35 PM