Since the public hearing on the Worcester Public Schools' FY19 budget is Monday (7 pm, Durkin Administration Building), I thought we'd best take a look at what's in it.
Remember, there is also this presentation before School Committee on May 3 (the video of it is posted online here), which is an overview of the big shifts.
I think it's probably good to remember, first, where the money comes from:

So of a close to $400M budget, about 1/4 of that is coming from local funds. As that state aid in blue is foundation aid--it fills the gap between what Worcester can afford and what the state calculates as "adequate"--you can also understand from this why Mayor Petty is talking to attorneys about suing the state over the need to update the foundation budget. If you're in Worcester (or, yes, Brockton, Chelsea, Springfield, New Bedford, Lowell...), there really isn't anything more important than this to us. And if you haven't asked your reps lately where this is, time to ask again.
Do remember--and the budget notes the House portion of this, as it's based on House funding--that there have been bits of implementation: House budget does some bit of implementation of the health insurance, and the Senate goes even further by including ELL as an increment and a bump in the amount (thus the Senate aid for Worcester is up more than $3M over the House).
To get into the ongoing "to meet or not to meet" on Net School Spending, the aim of the city (again) is to go over (a refreshing change from many years). The projection is this (p. 87):


City Contribution: The total city contribution increases $2.5 million, representing the amount required to increase in addition to maintaining the funding level provided through one-time free cash revenue in FY18 to fund contractual increases and Recreation Worcester site administration charges. At this level of spending, the City is projected to be $4.0 million, or 1.1%, over the FY19 required spending amount.

(emphasis added)
...but how much is the state requiring the city to increase their contribution? Here's the House (not the Governor's) requirement in city contribution (the yellow highlight):


...yeah, that says $2.5M. We're increasing by the amount required; that spending over NSS is resting on our laurels from prior years.
As you might remember from the presentation, that shakes out to this: 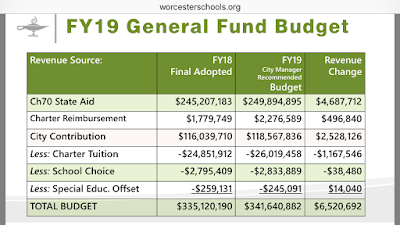 So we're up $6.5M over the prior year; that's good, right?
The trick, as you also might remember, is this: 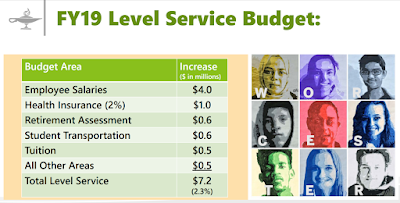 ...and a level service budget, for several reasons, isn't possible.

So what is Worcester Public Schools' administration proposing to the School Committee?
The first thing is this, which we need to keep in mind when we think about the budget balancing:

That's a one time thing, and, while we hope the students get picked up in the next count (those who stay, in any case), we still aren't looking at a funding stream that's sustaining.

I'd recommend page 7 for a summary of much of what's changing. For staffing:

In the teaching account itself (p. 165), that ends up looking like this:
And by the way, the difference between FY18 and FY19 (the last two dollar amount columns above) of $3M is balanced out by this section on health insurance on p.210:

...a drop in FY19 spending of $3M compared to last year's adopted budget. Remember as well, that WPS health insurance went up by only 2% this year, which is basically unheard of.

A midyear change that we're seeing now is a Coordinator for the young adult program for the New Citizens Center (at Fanning) was added during this current year.
There's also an evening coordinator for Worcester Tech, which is intended, it appears to not only allow for the building to be more thoroughly used by the community, but to become a self-supporting position.
Another big change is the ongoing warning (to Durham?) is over: the district is self-running buses next year. The district is taking 11 buses off of Durham and running those buses, which will also run field trips and athletics. The district is also taking over 4 special ed routes that used to be outsourced. That means, in addition to drivers, the district already added an assistant transportation director, and is adding customer service, a dispatcher, and a mechanic. I know the intent is for this to eventually be better service (and possibly cheaper); what I can't find is net budgetary impact for FY19.
Clinical services are switching from being outsourced to being done in house, as part of the "improved services and accountability while often saving money" work that's been a several year project.
The district is switching from 7500 leased desktop computers to 11,000 Chromebooks. The important addition to this, from the description on p.126 of Erate: "complete the three-year E-rate project that brings dense building wide highspeed wireless to all of the district's schools." Otherwise, the Chromebooks become a somewhat expensive way of playing the jumping dinosaur game.
Also, if anyone besides me was wondering about leaving the Windows universe entirely, page 155 has this:


When the desktop lease expires in January 2019, the district will re-lease approximately 1,000 new desktop computers for administrative staff and computer labs necessary to teach Windows specific applications. In addition, this lease will include Microsoft licensing and other ancillary items.

The administration is proposing the reduction of a Testing and Evaluation Specialist; this is one of those that sounds like an idea that everyone loves until we realize we need the position. As the accountability cabinet position is being "restructured to the teaching division" (as noted on the line for administrative salaries, p.173), thus no longer reporting directly to the superintendent but to the deputy, this is not a budget that's keeping an eye on this ball. Frankly, it makes me nervous. Also, note this (p.190):


The Testing & Evaluation Specialist position was eliminated upon vacancy during the school year and converted to an electrician position for the installation and maintenance of school security systems.

The administration also is (about time!) increasing translation to something approaching actual spending. We're a majority First Language not English district; we absolutely should be prioritizing this (p.179).
Something that isn't prioritized is student support, as the line (p.167)  that's adjustment counselors, guidance counselors, and psychologists is level service funded for next year.
I'm not really sure where to put this, but it's also pointed out that Elm Park is still a Level 4 school, still needs Level 4 services...but the grant has run out. That's over $400,000 the district has to find from...somewhere.
The biggest cut? 36 (all) the elementary literacy tutors are cut from this budget. That tutor cut should concern us. Tutors are the extra teachers working with students who are struggling with reading. Worcester may be keeping elementary classes largely close to the foundation budget level, but our kids need more support on this.

It's simply a cut; it would be good for us to ask what the district is going to do to support literacy.
Also, remember when that happens that unemployment (p.227) goes up, as the district has to pay back the unemployment collected from the state by such employees.

It also--I'd say "postpones"--summer school for next summer in not funding it. The hope is that funding will come through.
I hate this chart of student supplies funding, but I'm going to keep including it because it's important:
Also the facilities account appears to be increasing only due to trash disposal fees, HVAC being contracted out, and security costs, which means actual maintenance continues to be flatlined.
The district is hiring two painters (p.184) (which was a whole thing in FY12, but I'm betting most people don't remember that).
Do note the planned capital expense of $2.5M over 50 buildings for 26,000 students.
Slightly bizarre to me is the cut in the substitute line (p.171) below expected expenditure for this current year (and without narrative gloss):

...long term subs. No, I don't know why. I assume that it's trying to find money.

Apparently, the district picked up the administration of Recreation Worcester sites (at schools) last year, which I had missed. As that's now going from $27K to $100K (p.181), maybe someone should talk about that.

I also don't understand how this bit (p. 192) on crossing guards works:
...unless the amount they're being paid is being cut? But it doesn't say.

I'm going to flag workers' comp, only because it's one of the "I'm going to make a show of cutting it, and then you'll have to put it back during the year" things that particular members of the School Committee do (hey reporters: if someone does this sort of thing in the budget hearing, follow up over the year and watch the actual spending!). It's recommended to be increased in line with actual spending:
All the lines having to do with teacher recruiting--out of state travel, advertising, and such--are level funded. So is professional development.

Finally, if you just look at the line item, you might think the district isn't spending any more on policing:

If you've been following me for awhile, though, you might remember that not all of the spending on police is there; the vast majority of it is reported as a city contribution to education.
If you go all the way back to Appendix D, you can find the municipal net school spending (p. 415): 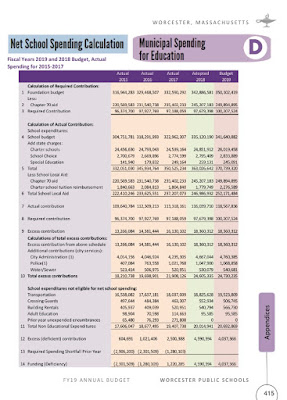 ...which I'm sure you can't read, so let's zoom on section 9:
So, yes, Worcester as a district--a district that's only increasing spending by what's required this year, that only is managing 1.1% over net school spending in a state where the average is 29.7%--is spending $1.1M on policing next year.
For all the reasons why that's a terrible idea, please see this post from 2015.

Again, the as-required-by-law public hearing is at 7 pm on Monday at the Durkin Administration Building.
And/or...you can always contact the Worcester School Committee.
Posted by Tracy Novick at 10:24 PM