regarding the STOP grant

I have been behind on my posting here for many reasons, but I struggled also with posting on this prior to the meeting such that I didn't trigger pre-deliberation.

On February 3, the Worcester School Committee was asked to accept a grant from the U.S. Department of Justice for $618,521. As we had a number of other complicated things on the agenda that evening, on my motion, the item was held.

At last week's February 17 meeting, the item was taken up, and, eventually, passed on a 4-3 vote (Kamara, Mailman, Novick opposed).

Because I know that wading through the entire nearly 200 pages of our agenda can be a lot, I've pulled out just the STOP ("Students, Teachers, and Officers Preventing School Violence" grant) as an isolated PDF here.

Let's start with why the grant exists: the federal funding is authorized via the 2018 STOP School Violence Act which:

...amends the 2001-2009 bipartisan Secure Our Schools Act to offer Department of Justice grants to states to help our schools implement proven, evidence-based programs and technologies that STOP school violence before it happens.

Note thus from its creation, this grant is a preventative grant, not a reactive grant; that is, the funding is set aside to prevent violence from happening, not to respond to violence once it has occurred.

In October of 2020 (you read that correctly), the Worcester Public Schools received a grant under this program. Specifically, WPS received a category IV grant, which is described as:

Due, we are told, to delays due in part to the transition in the federal administration, plus a change to the description of the grant due to the removal from the school resource officers from the schools, this grant did not come before the Worcester School Committee until more than a year after it was awarded.
The district, in making the case for the need for the grant, said the following:


...Domestic violence and child abuse are a key contributor to poor mental health and generational trauma in the city. In the past, Worcester was among the 16 Massachusetts communities with the highest child victimization rates; in 2010, the child maltreatment reporting rate in Worcester was 84.6 per 1,000 residents, compared to 56.3 per 1,000 for the Commonwealth overall. The following are examples of stressors exhibited by our students and their families: Domestic violence, Physical abuse, Sexual abuse, DCF custody, PTSD, Parents deceased, Parents MIA, Parents in prison, Parents in another country, Moving through foster homes, Siblings separated, Depression, Anxiety, Court involvement, Alcoholism, Drug addiction, Police issues, Cutting and Suicidal thoughts.. In response to toxic stresses our student's face on a daily basis, it results in violent outbursts in the classroom leading to in- and out-of-school suspensions. During the 2018-2019 school year, there were 2,909 suspensions in the district. The majority of infractions included 24% repeated school violations, 15% disruption of school, 13% physical assault on another student, 11% fighting and 7% physical assault on a school employee. As of the 2019-2020 school year there have been 1,627 suspensions, which have included 23% repeated school violations, 15% disruption of school, 12% fighting, 11% physical assault on another student and 9% physical assault on a school employee.

In the section regarding data collection, the grant application says:

Performance measures will be analyzed not only through activities conducted, but through school culture and climate assessments. The purpose of climate and culture assessments provided in the form of surveys and interviews is to gain knowledge of students and staff perceptions of their safety and to learn of any problem behaviors that need to be addressed to improve school climate.

Thus the outcome sought--that which will be measured and how the grant will be assessed as a success or failure--is an improvement in school climate and culture for a student body whom the district vividly describes as traumatized.

The way that grants work, in general, is that the administration applies for a grant that aligns (at least in theory) with the priorities set by the Worcester School Committee, and included in that application is always an outline of how the administration then sees the funding being used. Grant funding cannot be spent unless and until the Worcester School Committee accepts the grant, and our acceptance of the grant always then includes allocation of the funds by cost center, just as the rest of the budget.

Here is the allocation proposed for the STOP grant, as received (if you click the image, it will open on its own; it is also the final page of the PDF linked above): 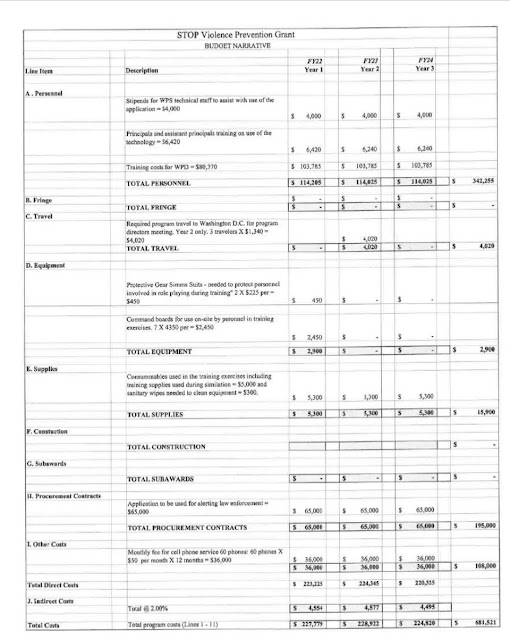 If you skim down the far right column, the totals, you'll see that more than half of the grant is allocated to personnel costs--that is, time--and most of that is for Worcester police department personnel. There is also equipment, including a protective suit and a communications board, and supplies, including "consumables" for training.
The rest of the grant, spread over personnel, procurement contracts, and other costs, is for cell phone service for assistant principals, an app for those phones, and training for the phones.
The latter, as the application describes, is for an application that circumvents the 911 system to go straight to officers from assistant principals' phones, which the district would then also provide from grant funding.
The bulk of the grant is described as this:

We seek funding under Category 4 Competition ID BJA-2020-18441 including providing Active Shooter/Hostile Event Response (ASHER) training to prevent student violence against others and self, including training for local law enforcement officers and school personnel. This highly specialized interactive training program will provide the foundation for implementing lifesaving initiatives. ASHER training will result in a more responsive and confident workforce, prepared and proficient in severe bleeding control and life-saving techniques. Personnel who will receive ASHER training include 300 Worcester Police Department patrolmen. Trainings will be provided to the WPD in two sessions for 2.5 hours each including a PowerPoint presentation, practical and a live scenario (simulation) with simunition training. During simulation practices, there will be a 1:8 staff to student ratio including one WPD instructor and eight trainees consisting of patrolmen. By keeping a low staff to student ratio this ensures trainees are given the highest quality of training for a high stress incident. In addition, 8-12 WPD SWAT team members will be role players during the simulation acting as victims to provide a more realistic scenario for trainees.

The bulk of the grant, which, the grant itself argues is for the improvement of school climate and culture due to the trauma under which our students operate, it thus for active shooter training for the Worcester Police Department. It is not for services for student trauma; it is not to support student mental health; it does nothing to address school climate and culture.
Note that this, of course, is also not under district purview.

Should that happen, one option available to the Committee—and the one that was before the Committee at the last meeting—is to vote ‘no’ on the grant as presented, and then vote to recommit the grant to the administration, directing it to amend the spending plan in line with mental health and school climate supports

That consideration happens Thursday at 6 pm.