And it's the first time the announcement has come this way!

The link in the tweet works; the budget is here.


The Worcester Public Schools is underfunded in the current foundation budget formula in the areas of health insurance, special education, and the skipped inflation adjustment in 2010. The district enrollment is relatively flat from the previous year causing no foundation budget growth due to enrollment. The foundation budget inflation factor is negative for only the second time in twenty-four years causing no increases in Chapter 70 foundation aid. The Governor’s and House of Representative’s proposed budgets provide additional funding for a change in the definition of low income and economically disadvantaged resulting in the total of the district’s Chapter 70 aid increase of $3.8 million.

I think that may be the darkest opening paragraph I've read in a budget (and I've read them back into the 90's). We did know that this was coming.

For those who were laying odds, Superintendent-elect Binienda's name is on the budget.While there may as yet be no agreed-upon contract, the superintendent's salary is budgeted for $200,000. That's an increase of $6000 over Dr. Boone's final salary last year, which is interesting, given that the incoming superintendent has no experience and no terminal degree.

The following major points jumped out at me just from skimming (per my open questions):

AND the mysterious increase in FY16 funding? Check out the city contribution schedule on page 406 (of the online PDF): you can click to make this bigger; I've got to change the margins on postings... 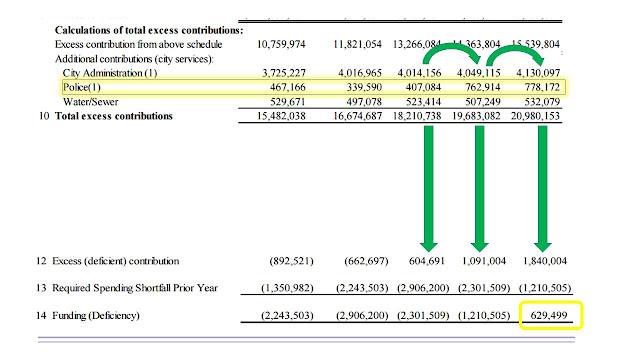 The big change last year was, indeed, the police being added to the schools. From just over $400,000 in FY15 to $762,914 in FY16 and projected for $778,172 in FY17, the city-assessed cost of police in the schools has nearly doubled over the past two years. That isn't the full cost; there's still $120,000 in the Supplemental Program Salaries, as well.
This year, there's not only the continued jump in police charges, but there's also an increase of almost $100,000 in administrative charges.
As always, those aren't costs the school committee votes on; they're charges the city levies against the school department, over which the school department has no say.
Thus the "over foundation" portion of the WPS budget is coming mostly in city administration and in policing.

The City Council hears the Worcester Public Schools' budget at their May 24 meeting; the Worcester School Committee budget hearings are I believe, as they aren't posted, June 2 and June 16.