Yesterday, the mayors and superintendents of Brockton, New Bedford, and Worcester held a press briefing in Boston, outlining the possible lawsuit they feel they may need to file and responding to press questions about the decision to procede. It was my Boston day, so I walked up to listen in.

Walked up the hill to the briefing by Gateway Cities mayors on a possible lawsuit #FBRC #MAEdu pic.twitter.com/qOfqrWP1uP
— Tracy O'Connell Novick (@TracyNovick) May 8, 2019

(if you click through to that tweet, it is the first in the thread of my livetweeting)
There was A LOT of press there:
The presentation they handed out entitled "Gross Inequities" can be found here. The three mayors spoke, they ran quickly through the presentation, one of the lawyers spoke, and then they took questions.

Mayor Jon Mitchell of New Bedford said, “We need more money, more resources to do what we are expected to do by the state and by those who send us into office to educate our children...Our school districts, our cities, have not been able to do enough to establish fully functional school districts.” And he noted who is most impacted:“This is a statewide issue which is felt most acutely outside of the Boston orbit.” Mayor Bill Carpenter of Brockton noted his own city's role in school funding--they brought both the McDuffy and the Hancock cases--said that they viewed working with the Legislature as the "best possible outcome" but were prepared to go to the courts if necessary. Mayor Joe Petty of Worcester boiled it down: "This is about equity...Equity for our children in the public school system." He said that the success of the cities in the future depends on the success of the children in the school system.

The presentation opened with reviewing some of the demographic changes that have happened since 1993:

The statewide enrollment of students learning English or whose first language is something other than English also has substantially changed: 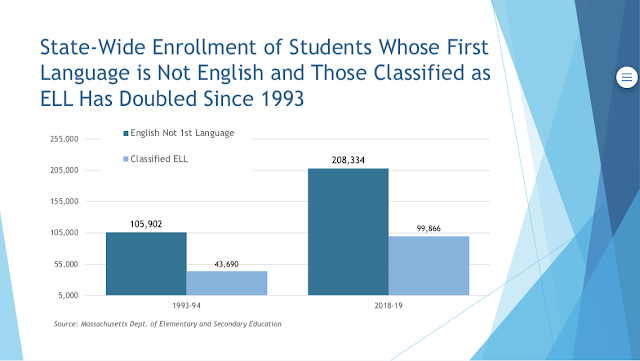 Worcester's students' first languages is now up over 100:

Worcester’s count on languages spoken by students is over 100 (they just passed it out; it runs for four pages) pic.twitter.com/ebwVpzpENW
— Tracy O'Connell Novick (@TracyNovick) May 8, 2019

And that English learner population is VERY concentrated: 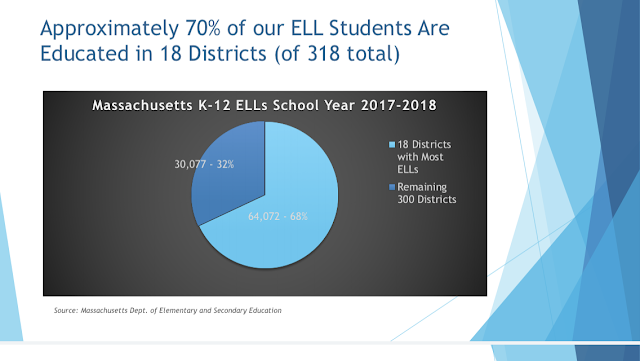 (something which wasn't done but should be? A dissaggregation of race and ethnicity and then poverty along similar lines. Those are also very concentrated enrollments.)

And what else to know about the Gateways? 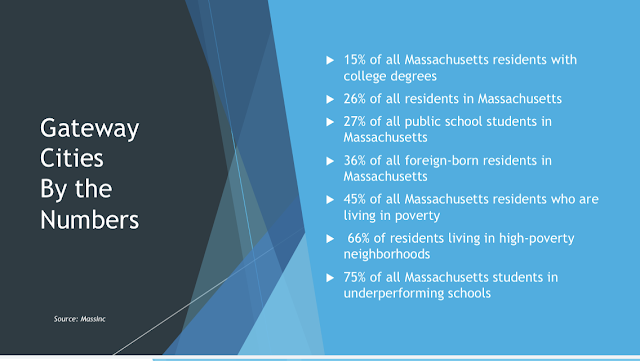 The presentation then ran through the reason for the funding issues, and the gaps districts currently are facing (hello, 770 teachers Worcester is short!). This, to me, is the story that isn't told enough or told vividly enough; too often, I hear a counter "but other districts have a hard time, too." Yes, but are they missing close to 20% of their teaching staff?

Attorney Patrick Moore of Hemenway and Barnes, among the attorneys who are working on this pro bono, ran through an outline of the argument: the Constitutional guarantee of education, the state's duty not only to provide it, but to provide it as changing with the times, and the state's lack of concerted action. He noted that a student entering high school when the Foundation Budget Review Commission came out would be graduating next month (parental note: in some cases, this month).He said, “We know more now and are learning ever more by the day of what it takes to meet the needs of those from disadvantaged backgrounds" but “the state plan has neither been maintained nor adequately funded, as the courts say is necessary...and the consequences are perhaps more than ever.”

When asked if there was a hard deadline, the general answer was "progress by the school year," which would, added to Mayor Mitchell's comment that his understanding was the Legislature intends to take this up after the budget, give them July and August to act. Asked what needed to be included, the mayors referenced the Foundation Budget Review Commission report, with Mayor Carpenter noting, "from Gateway Cities’ perspectives, we want to see what they’ll do for English language learners and low income students” (which many will remember was what was being left behind in last year's House proposal, with low income remaining the weakest portion of two of the bills proposed now). Asked about specific remedies, Attorney Moore said that the lawsuit will seek a declaration that the current state of affairs is not good enough; it then is to the Legislature to resolve the issue.
So: watch this.