A new report from Mass Inc walking through some thinking on local accountability for Gateway school districts was released yesterday; it's available for download here. You may have caught yesterday's Commonwealth Magazine article essentially arguing that there hasn't been any.
While I, too, greeted the notion of some new version of something called accountability, particularly for Gateway districts, with a sigh, there is a shift that could be happening worth talking about.
I was on a panel about this yesterday at the State House, and for me, part of this was putting it into context: we've replaced No Child Left Behind with the Every Student Succeeds Act federally, around which much of the conversation was in sum a sort of "Back off" message. That doesn't, of course, mean that testing isn't still very much the largest part of school and district measures from the federal level to the state level. But putting other things in for accountability and making the school report cards broader would seem--we hope--to open a conversation around what we want schools to do and be.
I don't know that we have those conversations.
I think it's also worth highlighting how poorly Gateway school committees reflect their student bodies. 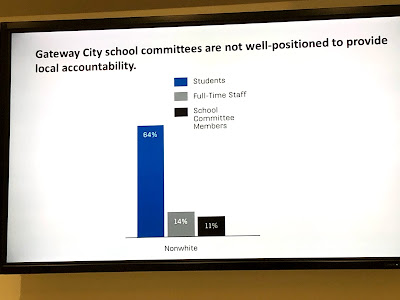 And how competitive those races have been. 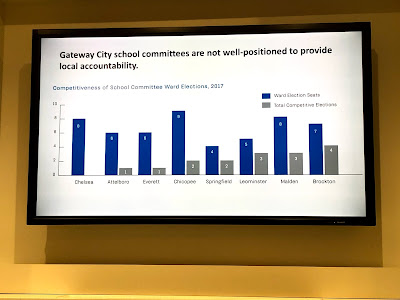 Mass Inc argues that this means we need new models of school committees--not, they propose, mayorally appointed committees, of which a review of the research reveals no real advantage--but of hybrids with seats set aside for local organizations. The answer, though, to not enough democracy, as revealed by who serves, is not less democracy; it's fixing the democracy we have for it to function more representatively.
The report talks about site councils, which I agree are one of the great unfulfilled items of the 1993 ed reform law. Reading through the law, it's striking how much time and energy and money have gone towards the other parts--the funding, state standards, MCAS, charter schools--with none on site councils. The model, though, was clearly to take the authority that famously was devolving to the school level and not put that solely under the judgment of the principal. Having then parents who are elected by other parents at a school who have done policy and budget at the school level creates a pipeline to school committee candidacy.
It would mean, though, that we have to want it: we have to genuinely create a table for this converation that is everyone's table for these conversations. Is that something that Gateway city leadership is really ready to do?