Why we need an ELL Director in Worcester ASAP

Over the weekend, the news broke that Bertha Elena Rojas, the Worcester Public Schools ELL Director, is leaving the district at the end of the month. Here's what we were told of the process next:


Ms. Binienda said her administration would start a search soon to replace Bertha Elena Rojas, who has been Worcester’s Manager of English Learners since 2013.

The superintendent said that search would include both internal and external candidates. She wasn’t sure as of this past week whether there would be an interim or permanent appointment to the post for the remainder of the year.

As Scott notes in the article, Worcester has one of the highest percentages of ELL students in the state; it's 34.2% on the district profile. That isn't the full story, though; you need to look at another number; check out the number just above English Language Learners: 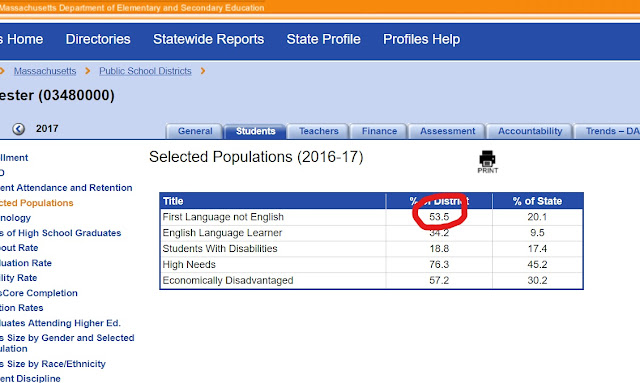 Unlike a lot of other demographic information that's reported about students, ELL classification isn't static: a student who comes in as an English language learner is only an ELL student for so many years. They eventually test out.
Worcester's student population is MORE THAN HALF first language not English students; many, many of those students were ELL students but have moved out of that classification now. The English Language learner population is constantly changing, not just as a population, but as individual kids. Managing that process successfully is crucial to just about everything else that those students do. This is also something that has gotten the Worcester Public Schools into trouble in the past.
With the new LOOK law, Worcester also has a chance to look beyond its current work in multiple languages.
It can only do that with strong, thoughtful, experienced leadership in this position AND SOON.
Posted by Tracy Novick at 6:47 PM