For those who are seeing the foundation budget account comparisons and wondering what that's about. I'm cribbing some of this from the explanation I've done for new school committee members on how this works, with some additions. If you're new to this, sit yourself down, and give this a bit of time. For who funds which part, read MassBudget on "Demystifying the Chapter 70 Formula"

The lawsuit that was decided in 1993 was called McDuffy v. the Secretary of the Executive Office of Education and it was decided based on the section of the state constitution that I quote at the bottom of this blog. The court found (emphasis mine):


In this light, we have considered the proper meaning of the words "duty" and "cherish" found in c. 5, Section 2. What emerges from this review is that the words are not merely aspirational or hortatory, but obligatory. What emerges also is that the Commonwealth has a duty to provide an education for all its children, rich and poor, in every city and town of the Commonwealth at the public school level, and that this duty is designed not only to serve the interests of the children, but, more fundamentally, to prepare them to participate as free citizens of a free State to meet the needs and interests of a republican government, namely the Commonwealth of Massachusetts.

And so the state was charged with coming up with some way of sharing the cost of educating children in the public schools across the state, with particular attention to the notion of equity: that communities vary in their ability to pay for the full cost of educating their kids, but kids must have an equitable education regardless, and further, that some kids cost more than others to educate.

In brief, that's what the foundation budget does.

The formula recognizes that most school spending can fit into one of eleven cost areas:

Every student in a school costs a certain amount in each (with the exception of special ed tuition) of these areas: so a first grader costs a certain amount of admin, instructional leadership and so on. Kids cost different amounts (it costs much more to provide what a vocational student needs, for example). There's also an add-on at the end for special education (a flat percentage) and low income (the actual count of the kids you have).
Taking those costs across the whole of a district's enrollment, and multiplying each out by how many kids the district has, you end up with a spreadsheet like this (this one is Framingham's from this year; as always, you can click to make it bigger): 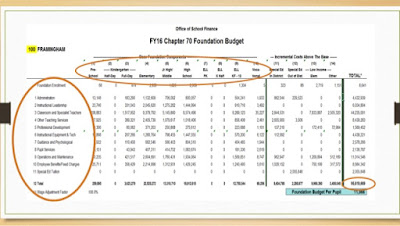 So it's a math problem, with the answer down in the bottom right corner:

(Don't forget: multiply before you add! And if you got lost anywhere above, send me a line.)
This is how much, at a minimum, it costs to run the district for that year.

What that means is that there's a particular amount each year that each district is "supposed to" be spending on each of the above categories (at a minimum; if communities decide to spend more, they can). So the district has a certain amount to spend on admin, on instructional leadership, and so on. They don't have to--allocation of funds is always under the purview of the school committee--but this is the assumption that the foundation budget is based on.
Except, of course, that the foundation budget hasn't been majorly updated in 20 years. There's an inflation factor, but no one has gone back and asked if this is REALLY the cost of doing business.

And it turns out that it isn't.

Now the two that were called out the most in the Foundation Budget Review Commission report are special education and health insurance. Special education, you'll notice above, doesn't have its own category (there's a sped tuition category, but that's just the out-of-district cost; that isn't in-district). So leave that one aside for the moment. Health insurance is in Employee Benefits.
Well, we talked a lot about Brockton last week, so let's look at their numbers. Here's the blue bar comparing what the state thinks health insurance costs the Brockton Public Schools with the orange bar showing what it does cost the Brockton Public Schools: 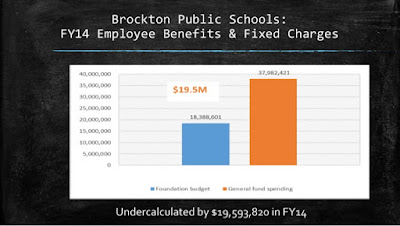 That's a $19.5 million difference.
Brockton isn't funded over foundation, so that money has to come from elsewhere in the budget. The biggest account for every district is teachers: 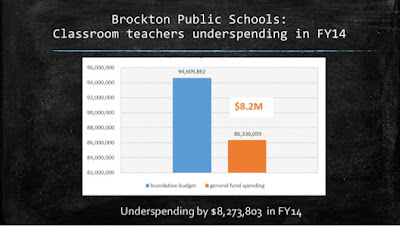 For FY14, Brockton is $8 million short in classroom teachers.

And that isn't all: 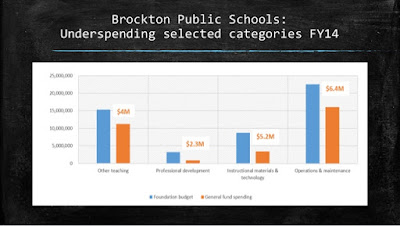 So this is why people--very much including me--are hammering on about the Foundation Budget Review Commission. There are real gaps--real missing teachers, real undone maintenance, real missing supplies--due to this being put off and put off.

It's well past time it was dealt with.