It's hard to miss

...what's missing here.
On Friday, the Department of Elementary and Secondary Education announced the districts and educators selected to participate in:

Influence 100 thus is intended to add to those working towards a superintendency in Massachusetts, while the inSPIRED fellows work to expand the teaching force.
The Department stressed:


To be selected for Influence 100, district superintendents and school committees had to demonstrate a strong commitment to the program and its goals.

That's it for the W's.
This is the Worcester Public Schools' student body: 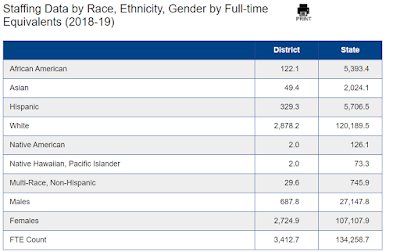 Worcester does have a single teacher (out of the teaching staff of over 3000?) participating in inSPIRED.
One doesn't expect the district to participate in every initiative the state creates, but it is difficulty not to see this as connected to the same resistence to working on the lived reality of students and teachers that was also expressed at Thursday's Legislative breakfast.
Posted by Tracy Novick at 9:51 PM

Email ThisBlogThis!Share to TwitterShare to FacebookShare to Pinterest
Labels: around the state, diversity, superintendent, teaching, Worcester