Yesterday, the U.S. Department of Education released a report comparing rates of spending on prisons to that on education:


Over the past three decades, state and local government expenditures on prisons and jails have increased about three times as fast as spending on elementary and secondary education. At the postsecondary level, the contrast is even starker: from 1989–90 to 2012–13, state and local spending on corrections rose by 89 percent while state and local appropriations for higher education remained flat.

All states had lower expenditure growth rates for PK–12 education than for corrections, and in the majority of the states, the rate of increase for corrections was more than 100 percentage points higher than the rate for education.

No doubt you will hear that Massachusetts was one of only two states (the other was New Hampshire) that had a lower expediture growth rate for prisons than for education. Remember, however, that this measurement goes back to 1979-80, thus including the enormous increase in the years immediately following the SJC finding in favor of the plantiffs in McDuffy. Check out just how close to equal those two lines are: 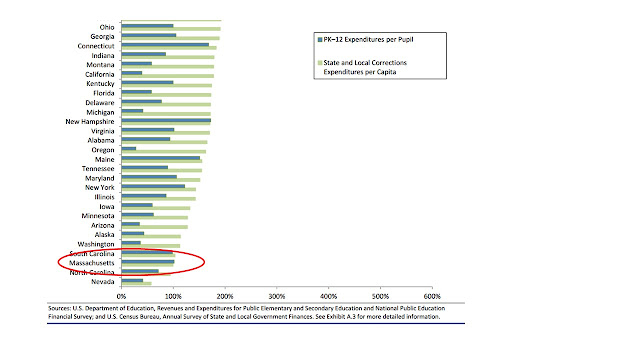