Remember, the budget session starts at 4 pm. The School Committee received an update of the recommended account sequence, which notes the changes made thus far.
They've got...most of the budget to get through. Past practice is they roll through budget until 6, recess to executive session, come back at 7 for the regular session, and then finish the budget as needed. There is not, however, a posted executive session, so maybe they'll just keep rolling with budget. Though it isn't on the posted agenda on the school website, there is an executive session on the city website: negotiations with aides and monitors, and a clarification and accretion petition from the EAW on large bus drivers (these clarify who is or is not in a bargaining unit...perhaps this is in relation to possible changes in who runs transportation?).
The regular agenda can be found online here.
I did some tweeting over the weekend on the agenda, if you want a short version.


Among the minutes being released are the executive session minutes from the negotiations with Superintendent Binienda over her contract. While the lengthy final executive session has minutes that aren't specific at all (minutes should allow for one to follow the deliberation; these do not), there are are a few things of note from the meeting before: 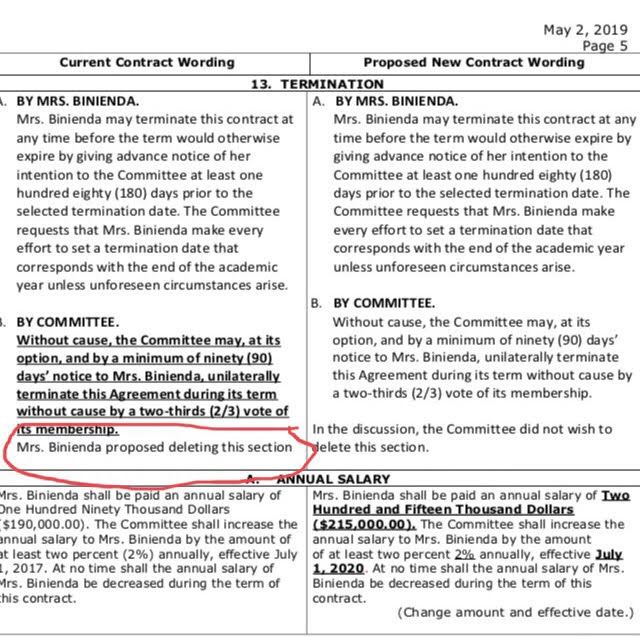 There apparently was also a proposal for her contract to be for two years rather than for three, and for the compensation ($215,000 with 2% increases annually) to be lower. They were rejected.

There is no report of the superintendent.

The Chief Diversity Officer position job description is back on the agenda. As it is a new position, it is (should be) subject to School Committee approval (new allocation of resources).
The personnel update includes a number of the principal assignments of next year. Worcester continues to be heavily dependant on "acting" assignments under this administration. Also, the public process of interview committees for which parents and others can apply to review is not happening.

The response to last session's budget questions is, as always, worth reviewing. 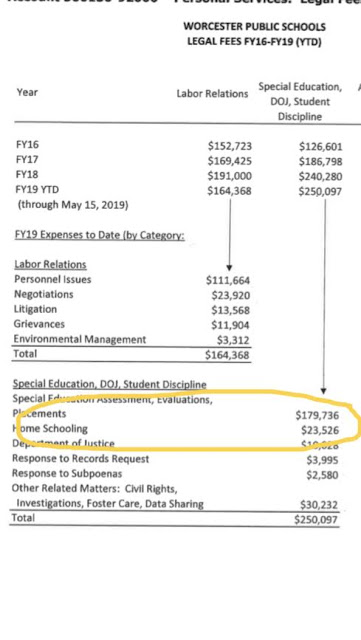 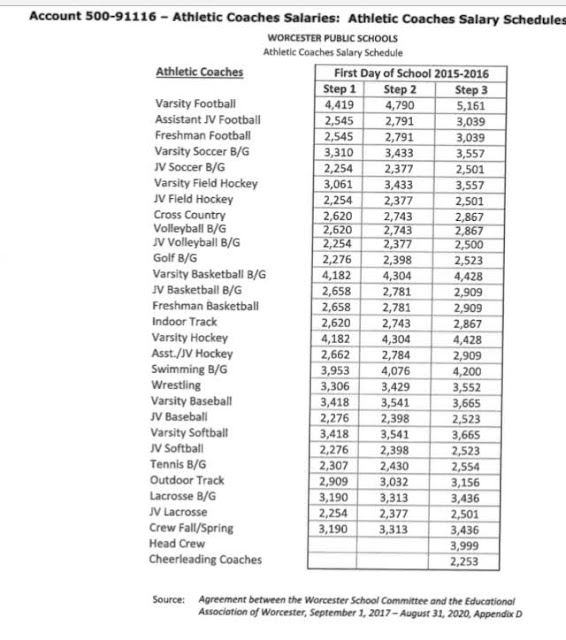 Later in the agenda is the annual "items that have budgetary implications" report. It reviews the science curriculum, runs through supplemental services, reminds of additional coaches, speaks of the drop in study halls (which was also done by stuffing kids into gym classes), includes the whole technology report, includes the sub raises, reviews school choice, nixes a Director of Corporate and Community Relations ("The focus of the Budget is to provide instructional positions and student supports."), and entirely punts on the need for more space for facilities:

The response to an action plan on literacy by third grade has a brief district overview of work done on literacy, a class count, and a a 78 page PowerPoint from MGH Institute of Health Professions entitled “The language basis of reading: Introduction to Orthography and and Word Learning (OWL) Project," which is clearly for a different audience on a somewhat-related topic. There is no action plan.
There is a response on summer reading programs in the schools, plus a 61 page report that is mostly the summer reading flyers and math calendars. Key point: STUDENTS CHOOSE THEIR OWN SUMMER READING.
The item on youth researchers who presented at Harvard is on the agenda; their report is not an accompanying backup, thus the administration did not, it appears, fulfill the request that it be made available.
T.E.C. Schools is expanding to grades 6-8 and need School Committee approval (fun fact: yes, School Committees approve private schools within their own area, under strigent parameters).
There's a $2250 donation for picnic tables at Curtis Apartments for the summer food program coming in from Project Bread.
There's a request to review the admissions criteria for Worcester Tech and its waitlist.
There's a request to review the Drug Task Force.
There's a request for a report on the schools that don't have cafeterias.
And there is a request to create the Patricia Falcone Memorial Scholarship Fund and accept donations to it from various donors in the amount of $2,215.00. Ms. Falcone was a former music teacher in the district, first at Forest Grove, then at Sullivan.
I'm going to make what parts of this I can, 'though I'll be coming back from the office to do it.
Posted by Tracy Novick at 10:57 AM