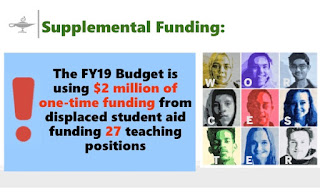 
After reaching a high of nearly 400 students last school year, the number of hurricane-displaced children attending the city schools plummeted to 99 in the district’s latest enrollment count, according to the School Department.
Brian Allen, the schools’ chief financial and operations officer, said about one-quarter of the evacuee students remained in the district as of the annual Oct. 1 count.

Remember, the idea was that the grants--there was more than one round--would cover the gap until students were picked up by the foundation budget. It looks as though most won't be, as they aren't here.
What does that mean financially?


That means those additional students technically weren’t counted in Worcester’s fiscal 2019 state funding calculations, and thus won’t count against the district’s funding amount next year now that most of them have left. In fact, the nearly 100 students who remain represent a roughly $1.2 million increase in state funding, according to Mr. Allen.

But the school system did receive nearly $2 million in emergency state aid earlier this year because of the large number of displaced students it took in; it may be unlikely the district will receive that amount again, which Mr. Allen said roughly equates to a hole in next year’s schools budget.


That is of course part of a larger budget picture, but remember, Worcester's school budget, unless there is city action, grows only due to inflation and enrollment changes. Unless the schools have picked up additional enrollment, it could be a tight one in FY20.

By the same token, this coming budget is going to be weirder (for lack of a better word) than usual: DESE is putting together policy recommendations for the foundation budget the Governor on his FY20 budget. If he takes any of them, the usual ability of the districts to forecast their state aid is going to be thrown off (and we already saw how differently that shook out last year, with the Senate getting ELL changed). That probably isn't bad, but consider this my warning that it isn't that the districts aren't running their numbers, necessarily, but that the state's usual direction might change.
Posted by Tracy Novick at 7:19 AM