A first look at FY19 in Worcester

posting from the balcony tonight, as the Worcester School Committee takes a first look at FY19. 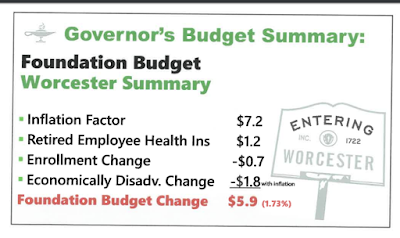 Foley: get this as early as we can so we can begin to push for priorities on Beacon Hill
Binienda: preliminary report from figures from the Governor's office
next two weeks, allocation meetings with principals: "does not at this point include those requests"

Allen: budget themes: slight enrollment decline, modest inflation rate increase, two changes in foundation formula "one positively and one negative for Worcester"
change of $5.9M; "below what we would typically see at this time"
12 year average of about $8.8M; only two years have a smaller increase
have not yet met with city; are assuming city contribution based on state requirement
all grants assumed level funded
FY19 estimated based on known contractual increases, assessments, or historic estimates

most districts saw enrollment decreases; only about a third saw enrollment increases
inflation: $7.2M
retiree health insurance: $1.2M (was about 10%; statewide 11%)
overall student enrollment changes: decrease of $700,000
about a $1.8M reduction due to ED change
$5.9M or a 1.73% increase

inflation higher than any year since FY13 at 2.56%
retiree health insurance works out to be $41 per pupil increase (he's disaggregate it and inflation separately)

5 students are included in the October count from Puerto Rico BUT are only at their grade level, as they hadn't taken ACCESS testing and hadn't enrolled in state services (so not counted in poverty)

could $6250 per student, with 320 students, could be $2M funding
"could be several weeks to a month to work out the details" of how that will be provided

enrollment up over ten, twenty, and twenty-five year categories
and here's the foundation budget for Worcester for FY19 by the Governor's budget: 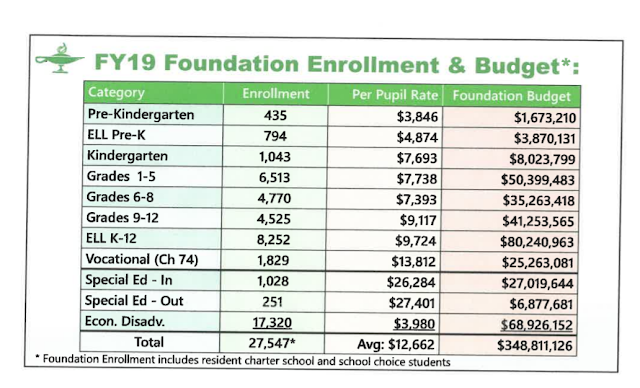 When we switched from low income to economically disadvantaged, there were winners and losers: 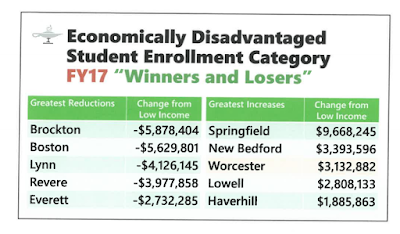 the FY19 drop of $200 per pupil results in this change:
"we went up in the number of students, but our funding went down" 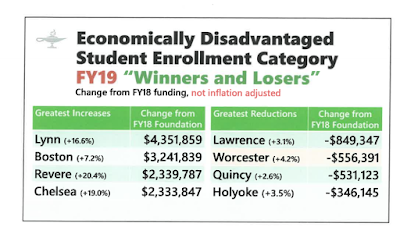 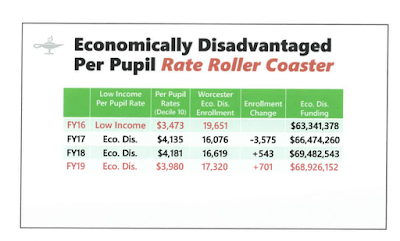 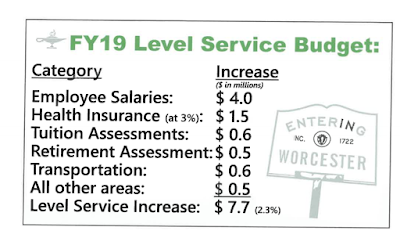 "that's actually below the foundation budget inflation rate"
health insurance isn't going up by as much as it has in the past
"but below the general fund increase"
contractual increase in prep periods: need 20 teachers
additional ESL teachers
computer lease ending
piloting WPS operated transportation
and the principals haven't weighed in yet
Legislative breakfast at the end of this week

Monfredo: to look at the budget carefully and see whether or not we have adequate funds for our children
"only the beginning of the process"
need for the implementation of the FBRC
"there has to be a starting point, the legislators have to move the needle!"
"and if not, we need to look at taking legal action"

O'Connell: saw MASS presentation
"very alarming"
"This budget as proposed is ultimately harmful to children"
"less than the rate of inflation"
factors of FBRC "clearly pending"
of students from Puerto Rico:"for those 300 children we have received to date $5000--not $5000 per student, $5000 total"
cites McDuffy
"woefully out of date...and nobody has yet addressed the mandates it requires some very substantial change"
speaks of Brockton considering a lawsuit "perhaps legal action...will precipitate the change we need"
"we don't need talk, we don't need sympathy...we don't need good intentions, we need substance"
"absent some significant action, the time for legal action is now"

McCullough
need to be reaching out to constituents and have them contact legislators as well
"highlighting again the students for Puerto Rico"
"we need to push on our end...we're owed money year after year after year"

Biancheria: if we didn't have the influx of students, we'd still be looking at status quo (?)
asks if the vocational rate includes Ch.74 programs at comprehensive high schools
Allen: it includes Tech, North, Doherty, not yet South
Biancheria: switch "has now set us back" on poverty count
"they seem to be looking at different numbers than our numbers"
could we look back at our enrollment in programs
Allen: speculation "victim of our own success" in getting students enrolled earlier
Biancheria: Binienda meeting with superintendents, Allen meeting with others
"making decisions in Boston with what programs they'd like to see continued and are not as concerned with the success of our programs"
that "they have the discussion that Worcester has taken the hit"

Comparetto: "but it's come to my attention that the Joint Committee on education might bring the foundation to a vote on either Monday or Tuesday...wondering openly if we should begin that conversation earlier"

Foley: beginning from a deficit position, anyway, of $90M plus in the hole
"should not be winners and losers in the equation"
have you asked DESE?
Allen: will have a chance to speak to DESE next week at MASBO, at appropriate time will provide an update to the school committee
"they view this as a whole that the state is going up $33M in the budget...they aren't seeing the impacts it's having on places like Worcester"
work with House on pothole so it doesn't hurt places like Worcester

Monfredo: perhaps tonight's media will get some attention
a letter to the joint committee before the vote
MOTION to send a letter which passes uanimously